written by Colleen Falconer May 19, 2020
0 FacebookTwitterPinterestEmail 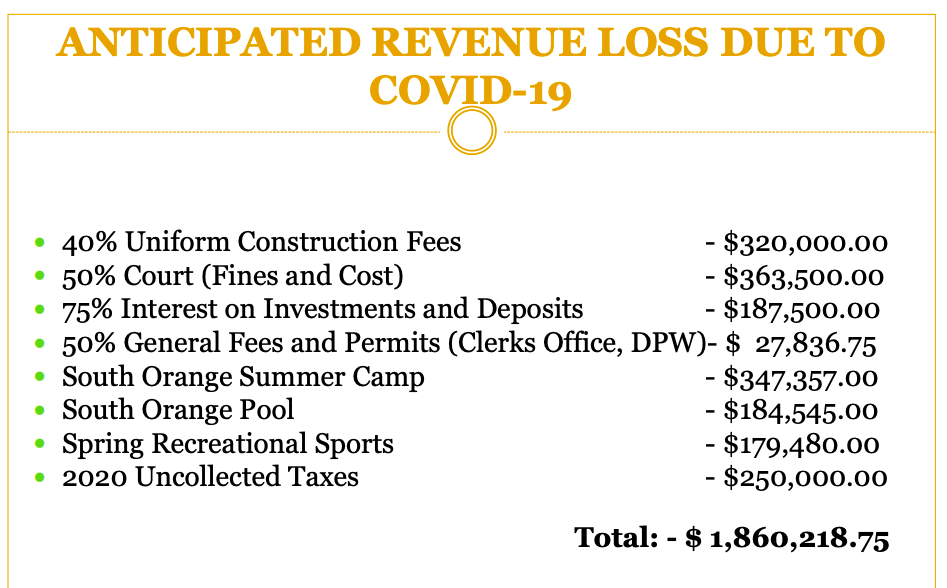 On May 11, South Orange Village Administrator Adam Loehner gave a summary presentation on the 2020 municipal budget, as Trustees voted to adopt Resolution 2020-109 “Introducing the 2020 Municipal Budget for the Township of South Orange.”

As promised at the previous BOT meeting, the Township is bringing the budget in at a less than 3% tax levy increase — 2.72% — despite a projected revenue shortfall of $ 1,860,218.75 due to the impacts of the COVID-19 pandemic. The increase in municipal taxes for the average South Orange household is calculated as $143 per annum.

Loehner reported that thus far South Orange has taken steps to cut spending by $1.6 million. Some of these cuts have been to new hires, capital expenses, and other general operating salary and wage appropriations (see presentation below). The list also includes overtime pay and salary for many municipal employees, and a 2-year salary freeze.

Village President Sheena Collum noted that negotiations were still ongoing with various bargaining units to arrive at a 2-year salary freeze in order to avoid furloughs or layoffs. Village Green reached out to the Superior Officers, South Orange Police Benevolent Association Local 12 and South Orange Fire Unions Local 40/240 for comment. On May 19, Lt. Alan DiEsso of the South Orange Superior officers replied, “Yes we are working it out.” Village Green will update this story with any additional replies as they are received.

There were no public comments on the municipal budget summary. The full presentation can be viewed here. The final budget will be adopted in June.

See the budget starting on page 278 of the attached agenda: