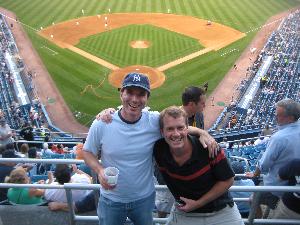 South Orange business owner and resident Matt Glass will be participating in the Spartan Sprint at Citifield on May 9, to help raise money for Multiple Myeloma.

The event is very personal to Glass, because his best friend, Sean Merriam, is battling the rare blood cancer. Merriam and Glass have been friends since 10th grade and they’ve worked together for many years (Merriam is a video editor who does a lot of work for Glass’s company, Eventage.)

Diagnosed one year ago, Merriam recently had a stem cell transplant and is recovering very well. “He will be at the race, on the field cheering his team,” said Glass, who is also chair of the South Orange Center Village Alliance (SOVCA).

Team Eventage is now up to 22 people – the largest team running for the Multiple Myeloma Research Foundation in the Spartan Sprint. “Half are from the company and half are friends of Sean’s through his wife and her work,” said Glass. Team members are from Brooklyn, South Orange, Lower Manhattan, other parts of Jersey

To donate, or for more information, visit this page.

About the diesase: Multiple myeloma is the second most common form of blood cancer and, sadly, has one of the lowest five-year relative survival rates of all cancers.

“But while there is no cure, great progress is being made,” said Glass. “And I am confident Sean will experience this progress first hand.”

Thanks to the important work of the MMRF, the world’s leading private funder of myeloma research, the FDA has approved six new treatments, including two in just the past 24 months – a track record that’s unparalleled in the world of oncology, Glass said. These drugs have doubled the lifespan of myeloma patients. And now the MMRF is funding 21 additional treatments in various stages of development, giving hope to tens of thousands of patients and their families.

Sean and I have been friends since 10th grade. He’s one of those friends that you can do anything with, anywhere. Whether it’s in our apartment in Brooklyn (before Brooklyn was hip), the Pond in Maine, the editing room, a beer hall or both Yankee Stadiums, we have been a close knit pair for about 30 years. Now Sean is up against multiple myeloma, a cancer of the bone which threatens his life. He’s currently in the midst of a stem cell transplant which will hopefully keep the cancer at bay while research tries to find a cure before it’s too late.

So what do you do for someone so close who is up against the battle of his life? Well, I guess you go to Queens and get the crap knocked out of you on a 3 mile obstacle race called the Spartan Sprint.

On May 9, I’ll lead Team Eventage as we raise money for the MMRF and show Sean how much we love him (even though I can’t believe he gets out of doing this thing). As many of you know, I’m never on the participant side of events so this will be something new for me in many ways.

The Multiple Myeloma Research Foundation is the first charity sponsor for the Spartan Races. The MMRF has helped triple the life expectancy for MM patients through life-sustaining drug regimens that extend and save lives like Sean’s.