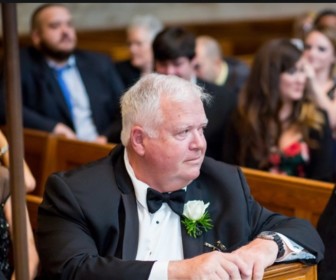 The Maplewood Chamber of Commerce will bestow its 2016 Distinguished Service Award on John J. Meade Jr., owner of St. James’s Gate Publick House, at its annual dinner at the Maplewood Country Club on October 20 (see details below).

Anyone whose life is even tangentially related to Maplewood knows Meade: You’ve seen him with his snowy white hair outside the pub or you’ve benefited from his generous support of numerous causes around town and throughout northern New Jersey.

From the Chamber’s invitation, here’s a brief biography of Meade, by Meade:

… Grew up in East Orange, one of seven children. Went to St. Benedict’s Prep, one of the greatest experiences of my life. Attended five universities, two before a stint in the Marine Corps and three after (on the G.I. Bill). When the G.I. Bill ran out, did my pursuit of a college degree. By then my wife, Donna, and I had a house and four children. Jim came later.

My career in the beer industry began in 1970. First with Rheingold Breweries and then for various beer distributors and eventually as a relief salesman with Peerless Distributors in 1980. Through the years, I became a salesman, area manager, and finally general sales manager of a 50 man sales crew. During that time I was able to support many Irish-American organizations in the North Jersey area — Project Children which brought together Northern Ireland Catholic and Protestant children every summer to live with families in New Jersey in hopes to ease the tension in the North. I was honored as Man of the Year by the Project Children organization. I was similarly honored by a number of Irish-American organizations through the years — Brian Boru, Shillelagh Club, Ancient Order of Hibernians; and I was honored by being selected as the Grand Marshal of the Newark St. Patrick’s Day Parade in 1997. I also supported many of the local police, fireman unions and veteran organizations in their time of need. That was my job and I loved it.

If you asked an Irishman what he really would like to accomplish in life, a good number of them would say, “Open me own pub.” Or “Write the great novel.” I’d like to do both. St. James’s Gate Publick House and St. Stephen’s Green in Spring Lake both are thriving, mainly because of the great support and dedication of my family. And because of that, I have been able to continue to support worthy causes, with the Robert J. Miller Foundation for Melanoma Research being the latest endeavor and by far the most rewarding. The outpouring of support for the Oysterfest was incredible and just shows how fantastic the people of Maplewood are!

The Maplewood Chamber of Commerce is acknowledging John Meade “for his many years as an active Chamber member and supporter as well as for his generosity of spirit. Over the years John has been involved in countless local activities, hosted numerous community events such as Breakfast with Santa, monthly Chamber meetings, and provided support for many local charities through St. James’s Gate. The Chamber is honored to add John to our long list of Distinguished Service Award Recipients.”

Tickets to the Chamber’s Annual Dinner are $100/per person. The event takes place Thursday, October 20, 2016, at the Maplewood Country Club, 28 Baker Street, Maplewood, New Jersey. Stationed Cocktail Party and Open Bar at 6:30 p.m., Program and Dessert at 8:15 p.m. Music will be provided by Bruno Lee and the Bet HaSHEM Band.

Affordable Housing Could Be Coming to Yale Corner...

Maplewood to Celebrate the Life of Police Chief...