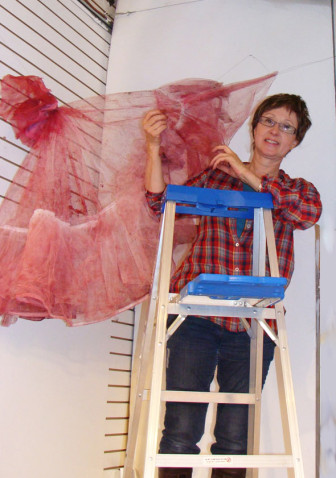 The newest piece in her ‘Silent Voices’ series, Promises, Promises: Artifacts and Evidence, is a stand against human trafficking. It will be on exhibit at 1978 Arts Center, 1978 Springfield Ave. in Maplewood, New Jersey from August 3-31.

Dushanko Dobek’s motivation for the ‘Silent Voices’ series was a shocking local story.

In March of 2002, four teenage girls were discovered being held as sex slaves in brothels in Plainfield and Elizabeth. They had been lured into the country from Mexico with promises of marriage. The look, feel and sound of Promises, Promises serves to intensify the disjoint between the dreams and fantasies of the girls and the horrific reality of their enslavement.

It is estimated that up to 800,000 people are trafficked across international borders every year. 80 % of them are women and girls. In the installation, tutus and wedding and prom petticoats, donated by women from around the country, are initially visually seductive. 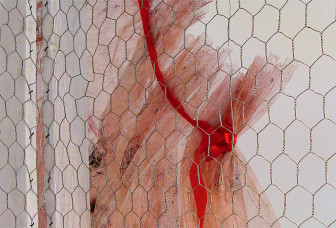 However, a darker side becomes evident as the petticoats are revealed to be stained, ripped and entrapped in cages. In her short video, filmed here in New Jersey, the artist has created a surreal evocation of the fear and degradation that marks the lives of  trafficked victims.Dushanko Dobek has exhibited nationally and internationally for over 20 years. Her most recent and immersive installation Parallel Migrations XX was in the historic Tempelhof Airport in Berlin, Germany. Last spring the Wildflower Sculpture Park in South Orange, NJ was the site of a forest installation. The artist  holds degrees from Rowan University and Pratt Institute. 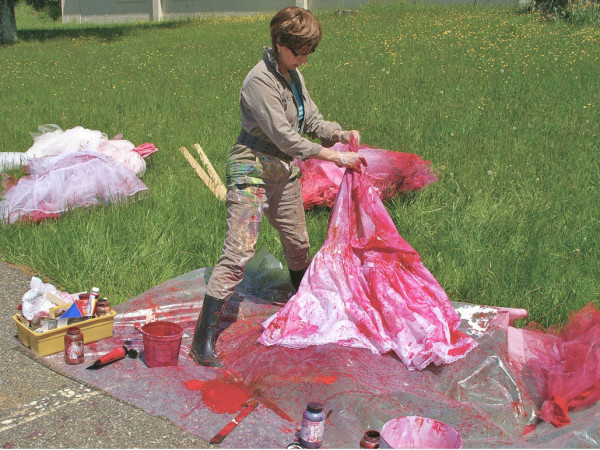 Promises, Promises: Artifacts and Evidence runs August 3-31. An opening reception will be held on Sunday, August 10 from 2:00 to 5:00 p.m. Gallery 1978 is located at 1978 Springfield Avenue, at the corner of Broadview, in Maplewood, NJ. www.1978artscenter.org