The following is from South Orange Performing Arts Center 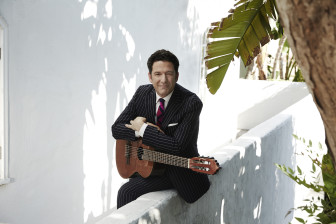 Swing right into the holiday season as SOPAC presents the John Pizzarelli Quartet on December 4 at 7:30 p.m. Hailed by the Boston Globe for “reinvigorating the Great American Songbook and re-popularizing Jazz” and pegged  by The Toronto Star as  “the genial genius of the guitar.” Pizzarelli brings a glow to the standards and dazzles with his guitar brilliance.

John Pizzarelli’s recording career started in 1990 with My Blue Heaven on Chesky Records. He played clubs and concert halls on the Jazz circuit, opening for such greats as Dave Brubeck, Ramsey Lewis and Rosemary Clooney. In 1993, he opened for Frank Sinatra’s international tour and then joined in the celebration for his 80th birthday at Carnegie Hall, bringing down the house singing “I Don’t Know Why I Love You Like I Do” with his father, Bucky Pizzarelli, accompanying him.

After recording albums for RCA devoted to torch ballads (After Hours), classic swing and bold originals (Our Love Is Here to Stay), holiday songs (Let’s Share Christmas) and the Fab Four (John Pizzarelli Meets the Beatles), Pizzarelli signed with the GRAMMY® Award-winning label Telarc International, a division of Concord Music Group. His string of successful albums started in 2000 with Kisses In the Rain and he has continued to record albums that bring acclaimed new interpretations to the standards.  A JazzTimes critic raved, “Spend five minutes with Pizzarelli and you’ll fully appreciate his inimitable warmth, humor and munificence of spirit.”

His 2008 recording, the GRAMMY® Award-nominated With a Song in My Heart, celebrates the music of composer Richard Rodgers. Subsequent albums featured Duke Ellington, the Beatles, Paul McCartney and more.  In addition to being a bandleader and solo performer, John has been a special guest on recordings for major Pop names such as James Taylor, Natalie Cole, Kristin Chenoweth, Tom Wopat, Rickie Lee Jones and the Dave Van Ronk, as well as leading Jazz artists like Rosemary Clooney, Ruby Braff, Johnny Frigo, Buddy DeFranco, Harry Allen and, of course, Bucky Pizzarelli.

SOPAC programs are made possible in part by the New Jersey State Council on the Arts. The South Orange Performing Arts Center (SOPAC) is a 501(c)(3)charitable organization. SOPAC received funding through a grant from the NJ Department of State, Division of Travel and Tourism, visitnj.org.