Despite Rumors, Chipotle is NOT Coming to South Orange 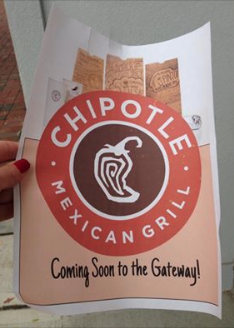 This flyer is fake: Chipotle is NOT moving to South Orange.

“Chipotle is coming to South Orange. PRAISE THIS DAY” read one post. “Awesome” penned another poster.

Some people wondered about the wisdom of having a Mexican fast food place move in just across the street from Tito’s Burrito’s, which has developed a loyal following on South Orange Avenue.

The main problem, though? It is simply not true.

“Whoever created this flyer obviously a) doesn’t know what they’re talking about, and b) has way too much time on their hands,” said Bob Zuckerman, executive director of the South Orange Village Center Alliance (SOVCA).

Zuckerman moved quickly to quash the rumor, posting on the SOVCA Facebook page: “Rumor Alert: There is a flyer around town and some Facebook chatter saying that Chipotle is coming to Gateway. THIS IS NOT TRUE. In the mood for some Mexican cuisine – head over to Tito’s Burritos or Toro Loco!”

What is true is that Mara’s Bakery and D&I Fitness both will be moving into The Gateway sometime later in 2014.

Meanwhile, who would have gone to the trouble of printing up phony flyers about Chipotle’s impending move and leaving them around town? It’s a mystery.

But luckily, South Orange is not wanting for tasty Mexican food. So if you are craving some guacamole or a burrito, check out Tito’s. Or if you like your Mexican food with a margarita, make a beeline to Toro Loco.