The Gateway Set to Open Sept.; Mara’s Bakery is Tenant 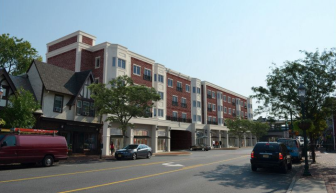 The Gateway in South Orange (rendering from The Gateway Facebook page)

The Gateway, the mixed-used luxury residential and retail development that has been rising in the heart of South Orange Village for just over a year, is set to open September 1.

The building, featuring 57 one- and two-bedroom apartments and 9,100 square feet of retail space, is located at 9 W. South Orange Avenue next to the train station. It is being developed by EEA Industries, LLC and SWH Residential Partners, LLC.

The site was vacant for nearly a decade and was previously the Beifus car dealership. The building broke ground in May of 2013.

“We’re buttoning up the finishes,” said Edward Ayuso, a principal of EEA. The apartments are around 50% leased and the retail, which will consist of three ground-floor spaces, is 80% accounted for, Ayuso said.

Ayuso confirmed that Mara’s Cafe and Bakery, a small chain with locations in Denville and Fanwood, NJ as well as in Brooklyn (and another to come in Berkeley Heights), will be one of the three ground-floor retail tenants.

“They are a gourmet, boutique bakery, like a Panera’s,” said Ayuso. A fitness center will be another tenant; the third has not been confirmed, he said.

Ayuso said he is very happy to be working on a project in South Orange. “The Village has been incredibly cooperative, and residents and merchants very understanding during the construction,” he said.

“Ed has been a fantastic partner, and through his work with SOPAC and the SOVCA, really has come to exemplify what an engaged and passionate person can impact in the community,” said Village President Alex Torpey in an email. “His project is a critical component of the incredible growth we’re seeing in the downtown and we all can’t wait for it to open!”

“This will rejuvenate that whole side of the tracks,” said Ayuso. “It’s going to change the whole downtown.”

The Village Green will tour the building in the next couple of weeks; look for more information and photos to come.