Maplewood Village to Welcome Virtual Golf and Vegan Restaurant — All in One!

Maplewood Village will soon be home to a unique new hybrid: a virtual indoor golf facility coupled with a vegan restaurant/juice bar, located at 97 Baker Street. Owned by longtime Maplewood residents, the operation — complete with three, 2-bedroom apartments on the top floor —  is set to open in February.

The 1,500 square foot ground floor retail space will feature Greens Indoor Golf in the back, and Conscious Fork vegan restaurant and juice bar up front. 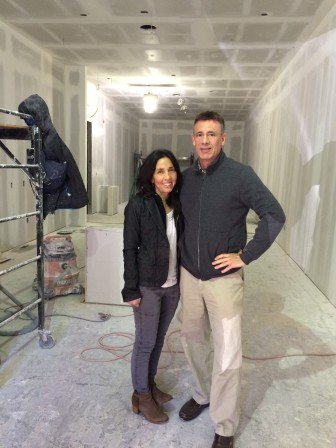 Kim and John Profaci purchased the building in 2014 with an idea to open a virtual golf facility. John explained that customers “play” on 50 major golf courses around the world, realistically depicted on large screens. As soon as a player “hits” the ball, overhead sensors analyze its movement and carry it into the visual imagery on the large screen as accurately as if that exact swing was taken outdoors.

“The players…get a true feel for playing the golf course and experience visual imagery as if they were actually there,” he said.

The Profacis had discussed the idea with their good friend, Angelo Vayas, a golf aficionado, who agreed it would be a great fit for the town. Vayas, who passed away from brain cancer in 2015, mentioned to the couple that 97 Baker Street was for sale.

“Without Angelo saying something, we wouldn’t have the building,” said Kim.

Meanwhile, the Profacis learned about the Conscious Fork in Warwick, NY, from their friend Blake Henry, owner of Baker Street Yoga, who had family there. Gabelmann had opened the juice bar/vegan kitchen and market nearly five years ago after ditching her high-stress sales career and attending a juice retreat in Southern California that “opened my eyes to the power of juice and clean food.”

Gabelmann had recently been looking to expand, and when she met the Profacis the three decided it was a great fit. “I felt [Kim and John] were likeminded and truly perfect to collaborate with on this next step.” 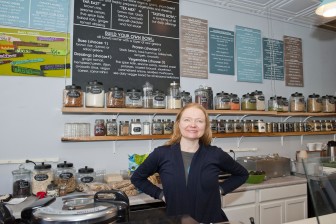 An employee from the Warwick location is relocating to Maplewood to manage the eatery, and Gabelmann will frequently check in from her home base in New York City.

Everything is plant-based and dairy-free and sandwiches can be made with gluten-free bread. They will use locally grown produce from the restaurant’s farm in the Hudson Valley. Food will be available for eat in or take out.

Kim Profaci said, there’s “nothing like this in Maplewood; organic, fresh, clean food.”

“I think and hope people in Maplewood will be happy to have this healthy option,” said Gabelmann. The three plan to create an integrated experience for customers; for instance, Conscious Fork will book tee times for Greens and provide healthy food options for golfers.

The Profacis, who have lived in Maplewood since 1991 in the same house in which they raised their four children (ages 17-22), have always been involved in health and wellness. John still actively trains and competes in triathlons and teaches weekly spin classes; Kim has been a personal trainer for 12 years.

“We like to think we have a healthy lifestyle, which includes being conscious about what we eat,” said Kim. “So, we’re excited about creating a space in town where people can come year round to be active and fill themselves with delicious food and drink, which just so happens to be good for you.”

The entire experience has been “a huge learning curve,” she said. “It’s been a very organic experience — pun intended. Now, this is the culmination. I think it’s going to be great.”