As home-based businesses become increasingly commonplace, the Maplewood Chamber of Commerce is eager to support entrepreneurs who’ve made the move out of the board room and into the dining room.

Chamber President Rick Gilman, who owns AppSolute Marketing, which he runs from his home, says he’s honored to serve in this capacity and looks forward to offering fellow home-based professionals programs and resources to help their businesses thrive. 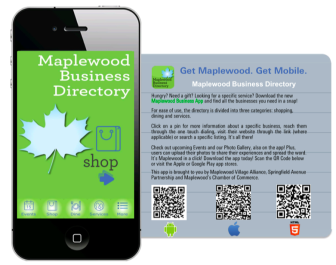 The developer, who designed the Maplewood Business Directory’s mobile app, says studies show the average person now spends three hours a day using a smartphone. Recognizing the importance of marketing and building relationships where consumers spend a significant portion of their time is what led him to begin building mobile apps for small businesses.

“Seventy-three percent of all local searches happen from a smartphone,” notes Gilman, who adds that these statistics illustrate the importance of meeting customers where they are.

The Chamber president believes this app will bolster business for Maplewood’s entrepreneurs by keeping it local. Interestingly, the app has garnered additional work for Gilman, an official developer on both Apple and Android devices. After checking out the business directory app, Union has hired him to create something similar to showcase and connect its merchants and service providers.

Chamber Executive Director Rene Conlon says she’s seen significant changes in the business landscape during the last 20 years. Following the economic downturn in 2008, she and Gilman agree that corporate lay-offs forced many professionals to start their own businesses, with many beginning at home.

Conlon says home-based ventures currently make up 40 to 50 percent of the Chamber’s members. As such, the Chamber has been working with the town to review the home-based business ordinance to acknowledge how the category has shifted.

“Businesses are much more varied and in much greater quantity than when the ordinance was crafted,” Gilman explains. “We’ve opened it up and recognize that business is going on in residential properties. Should it grow to the point that it needs to be in a commercially-zoned building, we want to make sure it has the incentives to do so. We want to be as supportive as possible.”

To that end, Chamber member Marc Stern, co-founder of Homeowner’s Hub, outlines how those getting a business going at home can benefit from joining and explains how the Chamber is making it more affordable.

“One of the prime initiatives is a reduced rate for membership dues,” Stern says. “To encourage participation, we have lowered dues for 2016 to $50 for Home-Based Businesses, which is half-price. We want to be an advocate for HBBs, and want to increase outreach and membership in this sector as it’s understood how important to our town’s growth this under-recognized sector is. The Chamber is a great resource for networking and for allowing your voice to be heard, and those with home-based businesses who don’t even know we exist — and that we’re not like your Grandfather’s Chamber of Commerce — should at least investigate what we have to offer.”

Committed to championing Maplewood’s home-based businesses, the Chamber held an open house earlier in the year and invited professionals to share their strategies for everything from writing business plans to harnessing the power of social media.

The event offered a chance to benefit from one another’s knowledge as well as “pick each other’s brains,” says Conlon, who also runs a home-based business.

She and Gilman say a similar event will be planned for 2016, but the pair notes that resources and networking opportunities are also available on an ongoing basis. Attending the Chamber’s monthly meetings offers a chance to get out and interact with others, something that’s invaluable, Conlon says, especially for those who’ve been working at home for 8 – 10 hours a day.

For those considering starting a home-based business, Gilman and Stern offer the following tips:

This is your new career. Just because it’s happening where you eat and sleep doesn’t mean it isn’t serious business.

2. Make a Plan and Stick to It

You might think you know what you’re getting into, but it doesn’t hit home until you put the hours in, says Gilman. So it’s important to put a plan together and stick to it every single day, he advises.

As best as you can physically and financially, set aside the space for your home office, Gilman says. Don’t end up working at your kitchen counter or dining room table. Carve out space for your business.

“Leverage as much technology as you can,” the app developer recommends. “There’s a wealth of technology that will enable you to do all sorts of things.”

Gilman says many people who’ve left a corporate setting are now juggling areas of the business that others previously handled for them, such as accounting and invoicing.

“There’s software that will help you with all of that and more,” he says.

“Networking is a powerful business building tool, and our Town has immensely talented and motivated residents,” Stern says. “And, check out the Maplewood Chamber of Commerce. Come to a meeting. We have breakfast, lunch and even evening meetings sometime. Or, just reach out to me with questions.”

As home-based businesses become ever more mainstream, Gilman, Conlon and Stern say the Chamber is ready and willing to assist at each stage of a business’s development.

Visit the Maplewood Chamber of Commerce’s website for more information.