On Juneteenth, South Orange-Maplewood Youth Speak Out Against Corporate Racism

At a march and rally on June 19, South Orange and Maplewood students spoke out about policies and actions by global corporations and local businesses related to racism, social justice and the Black Lives Matter movement.

A particular target of the march, organized by the Maplewood Youth Advisory Committee, was Starbucks due to that corporation’s policy — since abandoned amid social media backlash – to ban its employees from wearing Black Lives Matter clothing and paraphernalia.

The march was led by YAC members and rising CHS seniors Guedalia Dalambert and Elizabeth Crofton, and moved from the South Orange’s Starbucks location to the Maplewood Starbucks at Ricalton Square. Several community youths spoke.

“It’s sad that we have to fight for basic human rights in a country built on the backs of black people,” Dalambert told the crowd. “We’re here to tell Starbucks it was never okay.”

Laila Hoff, owner of local clothing brand Protect Minorities, spoke about her business’s founding. “I wanted to use my voice to emphasize the mistreatment of minorities worldwide.” Hoff touched on the brand’s relevance at home. “I shouldn’t have to worry for my own safety 200 steps outside my door,” she said. “This town is not safe, there is no place where a Black woman is safe…Why is speaking up for Black lives and racial justice arguable?”

Ben Morris was next to take the stage. “At the beginning of any protest regarding racial justice, it’s important that we acknowledge that we are living on stolen land, built by stolen African people who still have not been paid reparations, but who are getting genocide enacted on them by the illegitimate, settler-colonial government of the United States of America.” Morris also noted that the protest was taking place on Juneteenth, and that white attendees could celebrate by engaging in wealth distribution and giving material resources to Black people.

Josh Bradley read an original poem, mentioning the Ethiopian term ‘negus,’ which means ‘royalty’ and was later co-opted into a slur. “Ethiopia was one of the few countries in Africa that was not colonized,” said Bradley. “And now, we’re reclaiming [the word].” 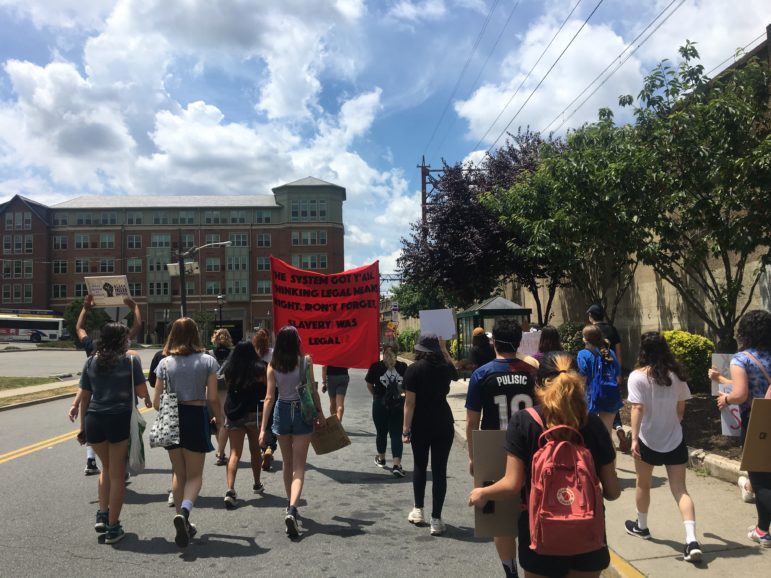 Ogenna Oraedu also shared original poetry. “Do you know what it’s like to wake up every day tired?” Oraedu asked. “In society, a Black women is the lowest on the totem pole. We are seen as undesirable, and loud, and angry. So yes, I am angry, and I am tired of being angry. But if being angry and tired means that change will come, then so be it.” Oraedu advocated for Black trans and LGBTQ lives as well.

Ciara Taylor spoke of structural and corporate contributors to racism. “It should not be our job to re-teach our oppressor…A lot of these corporations are making changes not because they genuinely care, but because they care about the Black dollar.” Taylor advised the audience to continue its fight with “consistency and intention,” and to boycott businesses like Starbucks that impeded that fight: “Black lives matter, Black lives are needed, Black lives are powerful…Does your Black life compensate for someone’s pink drink?”

More businesses were called out by Jordan Muhammad, who told the audience that “Starbucks is just showing its…true colors.” Her list ranged from chains like Taco Bell, Unilever and Panera to local establishments like Bunny’s and Maplewood Pizza. Members of the crowd called out to add the brand Mapso Supply to the list. Muhammad spoke about further examples of systemic racism at home, like the recent murder of Maurice Gordon by NJ State troopers: “Know it’s a lot closer than we think it is.” She also said the group was asking for deep, systemic change: “We are repeating history. Until we acknowledge the systems in place, we can’t change them.”

A rendition of Nina Simone’s “Mississippi Goddam” was performed by Deborah Ode. The song was written in response to the Mississippi murder of Medgar Evers and the bombing of the 16th Street Baptist Church in Alabama. “Look within yourself,” Ode told the crowd after finishing the song. “See what the system has made you, and break it.”

At one point, all attendees were asked to participate in a moment of silence for victims of police brutality and systemic racism. When it was over, Ciara Taylor returned to the mic. “I want you all to realize how many hundreds of years our ancestors have been silent.”