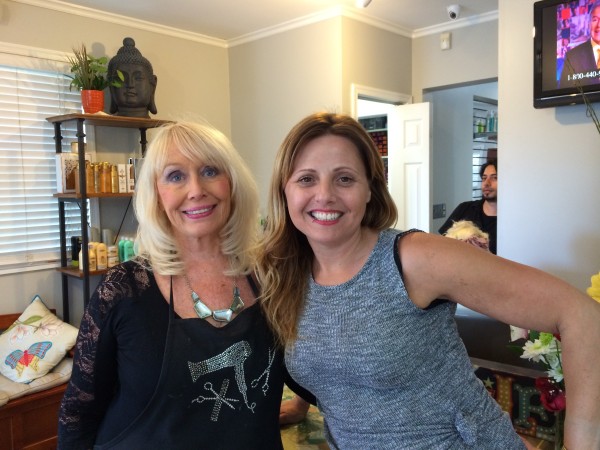 Libby Christensen (left) has passed her business on to Alma Victor.

The Chelsea Set, an institution in Maplewood for decades, has been made over into Staynd Color.

Libby Christensen, the owner and operator of The Chelsea Set, launched the business 35 years aglo. Christensen moved the salon to 2 Depot Plaza, in a little corner by the Maplewood Train Station, about 13 years ago.

Christensen herself is a bit of a local legend, penning a semi-autobiographical screenplay and having it made into the independent, award-winning film Split Ends back in 2009.

Recently, Christensen decided to step back from the burdens of business ownership as she passed the business on (she prefers not to use the word “sold”) to former employee Alma Victor.

Victor said that taking ownership of the salon “closes the circle” for her: She got her start at The Chelsea Set when Christensen hired her straight out of beauty school. “She was my mentor. I learned a lot from her. I learned to work with clients and accommodate.”

Victor spent a total of 16 years with Christensen before making the switch to Just Salon in Millburn five years ago. Last February, when Just discontinued its relationship with L’Oreal — Victor works as a educator and trainer for L’Oreal Professionnel — she knew it was time to go out on her own.

“Libby and I had stayed in contact. I called and Libby said, ‘I was thinking about you.'” Long story short — the timing was perfect for both women.

As Staynd Color (Victor notes the play on words in the name which can be read as “Stay and Color”), Victor is bringing in a new vibe, more staff and thus more clientele. Victor is a master of “balayage” a brush stroke style for highlighting that produces a natural, “graceful” look that grows out well.

What she learned from Christensen remains a cornerstone of the boutique salon: “I want to listen. You’ve been living with your hair and you know it. It’s a collaboration,” said Victor. 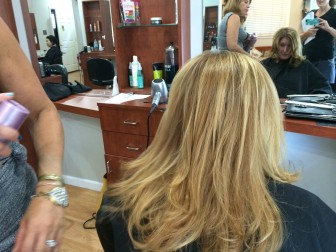 Alma Victor shows off some “balayage” highlighting at Staynd Color in Maplewood.

“It’s utterly amazing that we’ve come full circle,” said Christensen. “She [Victor] was always an interested  person — interested in different areas of hairdressing as well as life. She has that ability.”

Although Christensen looks forward to the free time that she will enjoy on her houseboat and with her grandchildren now that she has given up business administration, she will maintain the same hours in the salon on Thursdays, Fridays and Saturdays — serving new clients and some that she has been seeing for 35 years.

“I can’t get enough of the houseboat,” said Christensen. But it’s her grandchildren whom Christensen waxes poetic about, unable to contain her pride in granddaughter Kaeleigh who has been singing up down the east coast with an a cappella group. Christensen has three grandchildren, but with husband Art “collectively we have 11.”

“They are so precious,” said Christensen.