“Not one, not two, but three distinguished authors are here tonight,” said Words owner Jonah Zimiles on Monday, June 30.

Erens, who lives in Maplewood, read from her first novel, The Understory, re-released in April after the success of The Virgins.

“That’s the book that made her a celebrity around town,” said Zimiles.

The Understory describes Jack Gorse, an ex-lawyer, now unemployed, who guards his inner life with elaborate routines. The book was awarded the Ironweed Press Fiction Prize, was a Los Angeles Times Book Prize finalist and a finalist for the William Saroyan International Prize for Writing.

Rakoff read from My Salinger Year , a memoir of the year she spent working for Salinger’s literary agent. Rakoff, then an aspiring poet, used her literary talents to answer the author’s voluminous fan mail. Rakoff’s first novel A Fortunate Age won the Goldberg Prize for Jewish Fiction by Emerging Writers and the Elle Readers’ Prize, and was a New York Times Editors’ Choice and a San Francisco Chronicle best seller.

Budhos, who has six books to her credit, began the conversation by noting “proximities” to each of the authors. Budhos, who also lives in Maplewood, noted that Erens’ backyard is nearly visible from her house.

“It’s very comforting,” she said, “to know there’s another writer nearby struggling with words.”

Likewise, Budhos was represented by the agency Rakoff portrays in her memoir, during the 1990s, when the book was set. 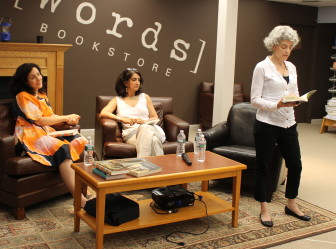 Erens introduced her main character, Jack Gorse, as a man who takes a craving for solitude to an extreme. While he lives in New York City, the book also sees him at a Buddhist monastery in Vermont.  The book is set in 1999 and 2000, a deliberate choice.

“I wanted to portray New York before 9/11,” explained Erens. “New York’s rough past was still in recent memory then.”

Rakoff’s memoir begins during the blizzard of January 1996.  Though it was a snow day, Rakoff didn’t know and forged her way through the streets to her first day of work.  No one else was in the office, she recalls, and almost no one was on the streets. “That solitude is impossible now,” she explained.  “Cell phones keep us connected in another way.” 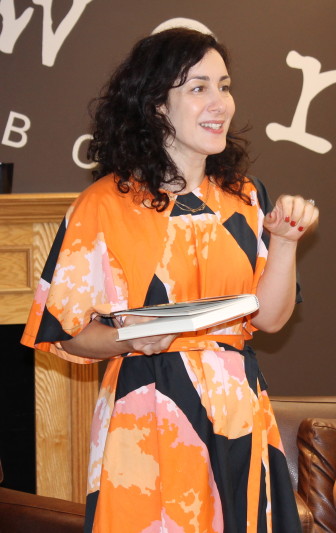 Rakoff’s book grew from an essay she wrote in 2002 and then another that followed upon J. D. Salinger’s death in 2012.  Before working as assistant to the author’s literary agent, Rakoff had never read any of Salinger’s works.

“I had the impression that they were cute,” she said. “Too many people liked them.”

On one weekend, Rakoff read all of Salinger’s works, and, she said, “it changed my life. My world was much larger. And much more complicated.”

The enthusiastic audience seemed to agree; authors’ works, including those of Erens, Rakoff and Budhos, enlarge the world, starting in Maplewood Village.