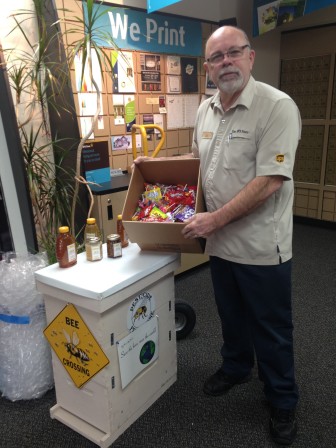 George Berkeley silently consolidates mounds of colorful candy from five boxes into one. At his UPS Store on South Orange Avenue, the military veteran and store owner is a man of few words — but kind actions.

When I approached him to see if he would co-sponsor the cost of shipping 118 lbs. of candy and toothbrushes to Operation Gratitude, Mr. Berkeley spent time on the phone with me explaining UPS charity shipping rates and options for cost-savings.

Operation Gratitude is a charity organization that “ships 150,000+ care packages annually filled with snacks, entertainment, hygiene and hand-made items, plus personal letters of appreciation, to New Recruits, Veterans, First Responders, Wounded Warriors, Care Givers and to individually named U.S. Service Members deployed overseas,” according to their website. They are also the direct recipients of thousands of pounds of candy collected nationally during the week after Halloween as part of the the Halloween Candy Buy Back program, which encourages children to part with excess candy and share it with those less fortunate. 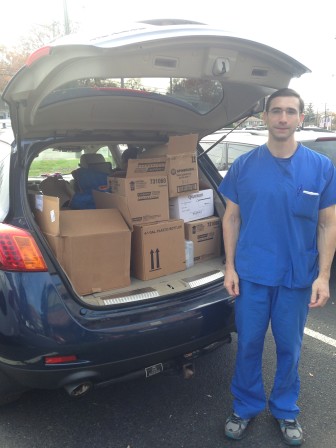 Collected by me in partnership with Maplewood Family Dental recently, where local children received a hearty thanks, a healthy toothbrush and non-sugary prize from Dr. Fried, the collection is part of a 10-year charity tradition originally organized by a dentist named Dr. Kammer. He created the program with the goal of  eventually donating 100,000 toothbrushes to troops overseas – as well as providing a bright spot with the candy that our children donate.

Yesterday, Mr. Berkeley generously underwrote 30% of the candy shipping cost to California, where Operation Gratitude is headquartered. Posing for a photo in front of one of the boxes of candy and honey that he makes as a beekeeper for Tassot Farms in Milford, New Jersey, the California-born and raised Berkeley has been tending bees his whole life. A man of seemingly few words, George Berkeley stopped for a minute to explain that a lifetime of bee-keeping was a passion of his, and that he was pleased to give back to our servicemen and women.

Seems everything he touches is infused with a kind of sweetness.

Editor’s Note: Berkeley and UPS’s devotion to Vets goes even deeper. After serving for many years in the US Navy, Berkeley decided to take the skills he learned and open his own UPS Store franchise, benefiting from The UPS Store supports veterans franchise program that offers $10,000 off the franchise fee and 50% off the initial application fee. More than 200 veterans nationwide have already taken advantage of this opportunity to be their own boss as UPS Store franchisees. Find out more here.