After Two Years, Former Highland Pl. Restaurant Might Get New ‘Lease’ on Life

There has been a big, gaping hole in the Maplewood Village dining and live music scene since Highland Place restaurant closed its doors nearly two years ago. Since then, the building has remained shuttered and the liquor license has been a source of contention, leaving township administrators — and locals — frustrated with the lack of progress.

Now, there seems to be a glimmer of hope on the horizon. 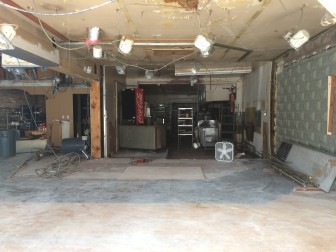 Renovation work has begun in earnest at the site, with a gut rehab apparently moving forward, according to the head contractor and seen during a recent tour of the space.

The owner, Max Kian, told Village Green that he was in discussions with a possible tenant, though he would not confirm a name. However, Kian’s attorney told the Maplewood Township Committee at its last meeting that the landlord was in talks with the owner of a gastropub in Mountainside. (The Village Green has reached out to that owner for comment.)

Even if a potential deal is struck, there is still one more hurdle to clear: the TC would need to vote to reverse its decision to not renew Kian’s liquor license, something it indicated it would be amenable to if Kian showed proof of a lease or agreement.

Asked for comment last week, Mayor Vic DeLuca said, “The TC has to make a judgement on the license based on the facts at the time the applicant presents his case. Any comments prior to hearing the case would be inappropriate and possibly prejudicial.”