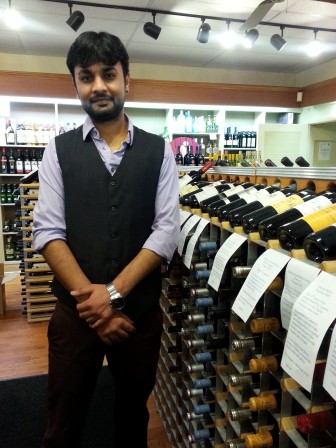 Longtime patrons of the Village Wine Shop in Maplewood will have noticed a new face behind the counter and between the shelves this year, after longtime owners Alan and Rosetta Weiser retired after 17 years. Although his tenure as co-owner is still short, Sid Patel is quickly building up a loyal customer base with his gregarious charm and stellar recommendations.

After emigrating from India in 2008, Patel and his family moved to Connecticut, and it was there that he discovered his love of wine while working as a stockboy, lifting cases and taking out the trash, at PK’s Discount Liquor in Norwich, CT.

“That’s where I started to put my feet in this business,” Patel said.

His love of wine translated into a desire to learn more, so Patel soon began studying to become a Certified Specialist of Wine (CSW), a certification offered by the Society of Wine Educators (SWE). According to Patel, the SWE certifies eight different levels of CSWs. Although he has already been certified at their fourth level, Patel’s passion for wine continues to push him to achieve the highest certification that the SWE offers.

“Wine and liquor, they are the only thing besides bread and milk that people need regardless,” he said. “If you are into the wines and grapes, it’s interesting because … wine has its own world and the more you learn, there is always more to learn.”

While nursing his nascent love of wine at the liquor store in Connecticut, Patel struggled for several months, saying that there were times when he couldn’t afford even a gallon of milk. “I was studying, I was working at a gas station, and I was working part time at the liquor store,” he said. “Though I didn’t have any money, I never asked for money from any of my friends.”

Patel eventually left his job at the liquor store and moved to Michigan with has family for 18 months, only to move back east for a job at another liquor store.

“My uncle called me back over here because he had an opportunity for me in Spotswood, [New Jersey],” he said. “Then I moved here and things started building up.” Patel worked as the manager of a discount liquor store in Spotswood, doing everything from opening the store in the morning to closing it at night, ordering stocks and tasting wines. With all the work he put into managing the store along with his continued study of wine, Patel soon realized he wanted to run his own store.

“If you’re working for anybody, you’re not satisfied with your pay for the thought you put in,” he said. “[I thought] I would rather put this effort in for myself rather than for somebody else.”

Patel took his savings, and along with a partner, began searching for a store to buy. One and a half years later, they found The Village Wine Shop, which had been on the market for three years. They officially took over the store in February of this year.

“It turned out to be good, and it’s getting better, knock wood,” he said.

Patel says that his goal in stocking the shop is to focus on buying small batch, artisan wines, unlike the previous store he managed, which was a discount liquor store that carried more commercial wines.

“I’m strictly against the strip mall collection,” he said. “I don’t carry Yellowtails, I don’t carry Beringers, because I have so many good distributers that I have found which have way better quality wines at a lesser price than all those commercial brands.”

Patel also places the utmost importance on the quality of his customer service. “When anybody comes back and they didn’t like the wine, we just take it back, no questions asked,” he said. “It’s a loss of a bottle, but it’s the gain of a customer.”

He emphasizes to his employees the importance of greeting customers with a smile as they walk in, waiting no more than three to four minutes before asking a customer if they need help, and wishing the customers a nice day as they leave, even if they do so empty-handed. Patel says he picked up the importance of greeting and interacting with customers after a stint as a car salesman in Princeton, the job he held down between managing the previous liquor store and owning the current one. The effort is paying off.

“My customers know me by name by now, most of them, and I know them by their name,” Patel said. “My customers are like friends.” He said making the effort to get to know his customers is often as simple as asking them what they’re having for dinner.

“They’ll take whatever [recommendation] I give because I have never abused that liberty and I’ll never, hopefully,” he said. “They come back, they appreciate it, and I have customers as well who like my suggestions so much that I have gotten a few gift cards from Arturo’s, from Lorena’s, just thanking me.”

Patel is constantly seeking to increase his own knowledge of wine to be as much of a resource as he can be for his customers. One of his suppliers and good friends helps run a wine tasting at the shop every Friday night, and Patel makes sure to take advantage of his vast expertise.

“When he communicates with my customers, I grasp it,” he said. “Like when people say that, ‘Oh, I’m going for sushi, I need a nice white wine,’ I hear his pitch and so know what wines go with sushi.” In this way, Patel aims to supplement his CSW certification with his ever-increasing practical experience.

Patel wants his employees to be as knowledgeable as possible, too. He keeps several authoritative and comprehensive guides on wine in the shop’s office and will often test his employees by asking them to read a certain number of pages and telling them that once they memorize it, he will ask them anything randomly. Yet overall, Patel trusts his employees to make the same quality recommendations that he does.

“I would say that, look at a ten-mile radius, my employees are the most educated on wines,” he said.

In taking over the Village Wine Shop, Patel has worked to create a welcoming and friendly environment in which people, either his customers or his employees, can love and learn about wine.

“You give respect, you get respect,” he said. “I have told both my employees, ‘You know, we’re all like a family here.’”