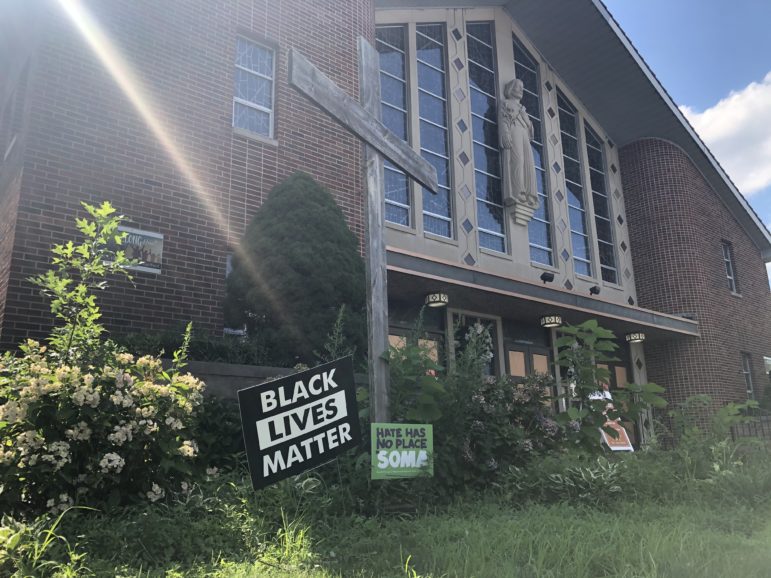 Since the death of George Floyd in May, a group of parishioners at St. Joe’s Roman Catholic Church in Maplewood, NJ have been meeting every Tuesday via Zoom to discuss how the parish community can support the now global social justice movement against systemic racism. They call themselves the St. Joseph’s Workers4Justice.

“We affirm that Black Lives Matter precisely because it is demanded by the Gospel of Jesus Christ and by Catholic social teaching,” reads a document titled The Catholic Call to Anti-Racism Work drafted by the group. “It is likewise encouraged by the U.S. Conference of Catholic Bishops that the Catholic faithful strive to eradicate racism through both a conversion of the heart and a reform of eclesial, civil, and social institutions that suffer from systemic racism to this day.”

Local residents Axel and Kim Takács helped spearhead the St. Joseph’s Workers4Justice group which they say had been in the works prior to Floyd’s death but came into fruition as the world took the streets in late May and early June.

Having moved to Maplewood last summer, the Takácses found a progressive, inclusive Catholic community at St. Joe’s that reminded them of the parish church they attended in Boston. St. Joe’s Open Doors group which is welcoming to LGBTQ Catholics and its event hosting Fr. James Martin SJ last winter were indicative of the parish community and its leadership. 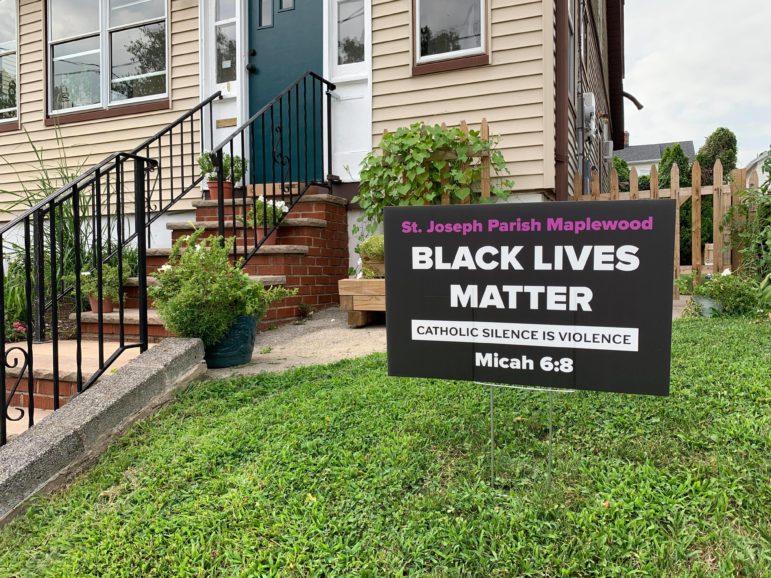 Axel Takács is an assistant professor at Seton Hall University where he teaches and researches Catholic theology and Islamic and interreligious studies. Kim is a pediatric speech and language pathologist.

They report that the St. Joseph’s Workers4Justice group typically numbers 9 or 10 members each week. The group has created a mission statement and an action plan and has ordered a banner for outside of the church as well as lawn signs for parishioners that read “Black Lives Matter” and “Catholic Silence Is Violence.” Events are planned for the future such as “lawn chats” as well as a Mass for victims of systemic racism.

Both were upset to hear about recent events at Our Lady of Sorrows parish where pastor Rev. Brian Needles asked lector Tom Morris not to wear his Black Lives Matter shirt while reading at Mass. They said that affirming “Black  Lives Matter” should not be about the organization, but about the moral message.

As many local South Orange and Maplewood Catholics posted to social media stating their disagreement with Fr. Needles’ response, the Workers4Justice group wanted the community to know that other Catholics were embracing the phrase and message of Black Lives Matters.

“Our statement document ‘Catholic Call to Antiracism’ and our commitments to antiracist action are not simply a knee-jerk reaction to the actions of one priest at one church,” the Workers4Justice group stated in an email message. “They are in response to years of Catholic communities, parishioners, and leaders largely being silent toward and complicit in racism, not listening to Black voices, and in general, falling short in our support of marginalized groups. This event that happened in our local community added urgency to the work we had already begun at St. Joseph’s. Work that, quite frankly, is long overdo.”

The message continues, “Going forward, we, as Catholics, need to be more involved in and explicitly concerned about racial justice and to be vocal that the teachings of the Catholic church actually do call all Catholics to acknowledge that Black lives matter and to work to dismantle racism, both systemic and personal. This shouldn’t be radical, revolutionary, or unique; Catholic Social Teaching demands antiracism work, but too few Catholic parishes, parishioners, pastors, and educators have taken seriously the Catholic call to be antiracist. We need to listen to our Black parishioners and neighbors, we need to protest systems of oppression, we need to examine our own implicit biases and privilege, we need to speak up against injustice, we need to organize for change. This is not about politics, this is about justice. We cannot be silent.”

Fr. Jim Worth, the pastor of St. Joe’s, supports the work of the group. 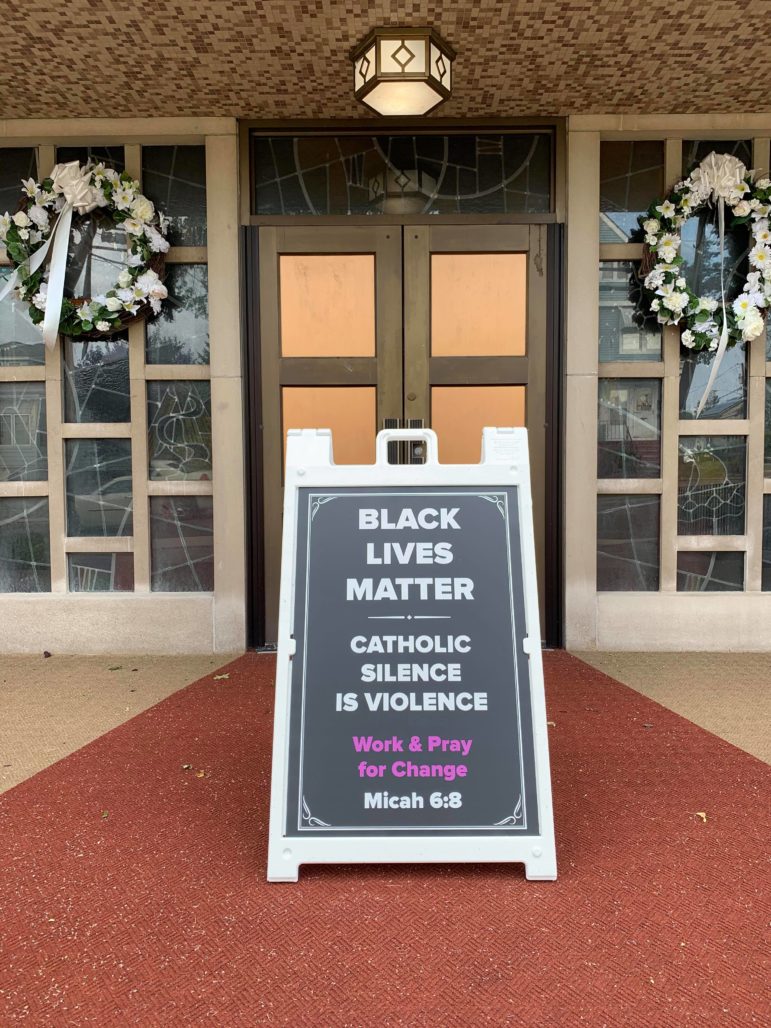 This sign arrived at St. Joseph’s RC Church in Maplewood on August 6, 2020.

“I think that Catholics in general do not have a good grasp of Catholic social teaching – specifically with regards to racism,” says Fr. Worth. “The murder of George Floyd has now opened up dialogue that is essential. We as a parish at St. Joe’s have been working with social justice for a very long time before I even got here and I’m continuing the mission. Just as we worked with Fr. James Martin to minister to our LGBTQ community, we want to help out with our Black brothers and sisters whose lives are on the line and who are not being treated with the equality that Jesus commands us to give.”

It’s a message that has been sounded by Pope Francis as well as Newark’s own Cardinal Joseph Tobin. Even as the Archdiocese of Newark — to which both Our Lady of Sorrows and St. Joseph’s belong — noted that there is a dress code for lectors in supporting Fr. Needles, Cardinal Tobin made a strong anti-racism social justice statement in early June.

“The necessity of naming the evil of racism humiliates us, since so many events in our lifetime, let alone the history of our nation, have compelled us to shamefully recognize the national sin that obliges African Americans to endure unique and relentless humiliation, indignity, and unequal opportunity,” wrote Tobin. “Our tolerance of racism as well as collective deafness to the cry of those so grievously offended and the conscious and unconscionable promotion of divisions in this nation has encouraged the heinous evil of racism to propagate.

Tobin called for the eradication of racism through peaceful means, invoking both the “Blessed Virgin Mary” and the Rev. Dr. Martin Luther King Jr.: “The Archdiocese of Newark must renew our commitment to making the dream of peace built on justice and racial equality a reality for all our sisters and brothers, here in northern New Jersey as well as throughout the United States.” 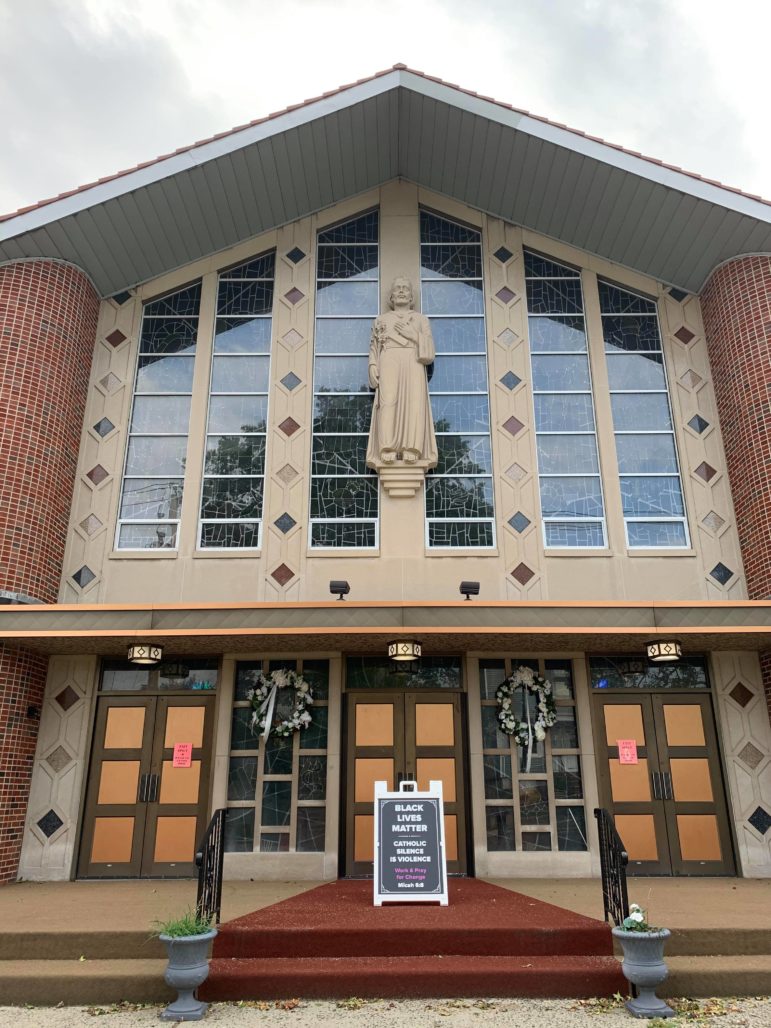