The pastor of Our Lady of Sorrows Roman Catholic Church in South Orange, NJ sent a letter to parishioner Tom Morris two weeks ago asking that he not wear Black Lives Matter t-shirts while serving as a lector during Mass.

“Nobody in their right mind would disagrees [sic] with the idea that the lives of Black people matter and are deserving of all respect and dignity and legal protection,” wrote the Rev. Brian Needles. “Many people, though, have concerns with the organization called Black Lives Matter, which is a 501c3 non-profit corporation that has an agenda that is very controversial, to say the least.”

Morris, 68, is a retired Newark special education teacher and has been a member of the parish since about 1981, he reports. In that time he has raised five children in the parish, taught Confraternity of Christian Doctrine (CCD) classes, worked in the food pantry, served on the social justice committee and more. He has served as a lector — or reader — at Mass for decades. 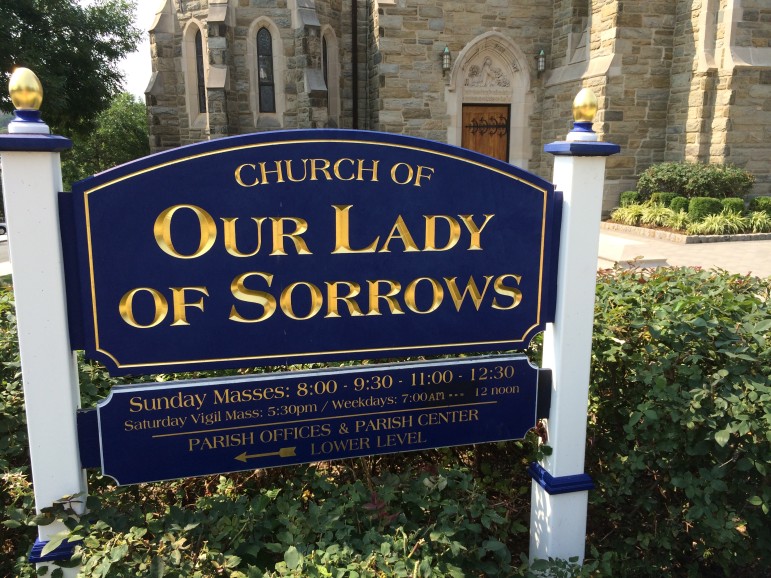 Our Lady of Sorrows OLS

Of late, Morris has been posting on the SOMA Lounge NJ Facebook group about the negative reaction he has received from a few other parishioners since he’s been wearing Black Lives Matter and other social justice-themed t-shirts (“I’m wearing one that says, ‘I can’t breathe’ today,” said Morris in an phone interview on Saturday.)

Recently he gave permission to SOMA Black Parents Workshop to post Fr. Needles’ letter on its Facebook page (see the full letter below).

Former BPW director Walter Fields wrote, “Since when does taking a stand on justice offend the Scriptures or the teachings of the Church? It is no wonder why there was absolute silence among clergy leadership when Black children were assaulted by the Maplewood police and discriminated against by the school district. What faith is this? This is why we must commit to causing #goodtrouble.”

Morris said he is indeed inspired by the late Congressman John Lewis to “get in good trouble.”

“The little thing I can do is wear this t-shirt. My five kids encourage me to do this,” said Morris, who added that he was concerned that some church leaders and members were “not into the social justice aspect of the teachings of Jesus.”

Even though it will keep him from lectoring, Morris says he will not stop wearing his t-shirts. “I won’t stop. I’m committed. I will not back down.”

Morris said, “I’m not angry. It saddens me.”

He added, “I have a grandson three years old. This is not the world I want my grandkids to live in. My former students are being killed.”

Instead of OLS, Morris has been attending daily Mass at St. Mary’s in Newark — which Morris says is a more progressive parish.

As TapintoSOMA first reported, the Archdiocese of Newark has backed up Fr. Needles’ assertion that lectors abide by a dress code. Although the Archdiocese of Newark “affirmed the right of any parishioner to wear clothing that promotes a cause or movement,” in response to this incident, “it will be asking pastors to reiterate the dress code” for lectors that “prohibits t-shirts and any clothing that distracts from the word of God by drawing attention to the individual.” Read the full statement from the Archdiocese, obtained by Village Green, below.

Meanwhile, Morris reports that he has received a followup phone message from Fr. Needles expressing disappointment that he has shared his letter publicly.

“The silliest thing is when he told me I had to be instituted as a lector,” something Morris called “clerical b.s.”

“It’s not about me. I want to call attention to the teachings of Jesus – how we are supposed to treat each other.”

Morris reported that Fr. Needles is away this week. Village Green has reached out to Fr. Needles for comment.

I hope you are well.

I write to let you know that several people have complained to me after seeing your t-shirt with the Black Lives Matter slogan on it. I believe that you were already aware of the discomfort some felt by seeing this t-shirt the last time you wore it in church. When you wore it at Mass again today, I received several negative comments as well as an email of complaint. I obviously have neither the power nor the desire to dictate what clothing a person wears to church. On the other hand, I don’t wish to see a t-shirt become a source of division among my parishioners.

Nobody in their right mind would disagrees with the idea that the lives of Black people matter and are deserving of all respect and dignity and legal protection. Many people, though, have concerns with the organization called Black Lives Matter, which is a 501c3 non-profit corporation that has an agenda that is very controversial, to say the least.

I therefore respectfully request that you, in a spirit of good will, refrain from wearing that t-shirt or any other t-shirt with an overtly political slogan on it when lectoring. We live in such a contentious society already and I don’t want a t-shirt worm at Mass to become a source of distraction or bad feelings in our parish. When the Word of God is proclaimed, nothing, including a slogan on a shirt, should distract listeners from the fruitful hearing of the Scriptures. While you are obviously entitled to your beliefs and have every right to express them, I’m hopeful that you‘ll consider the idea that a t-shirt, incredibly enough, can be a real source of division and distraction.

In addition, I prefer that any male lector wear a collared shirt and not a t-shirt, with or without a political slogan on it. If you have a concern with that, then I would simply ask that you not come forward to lector. By the way, I am presuming that you have been instituted as a lector at OLS. If that is not the case, please let me know.

I hope you receive this email in the spirit in which it is intended. My intention is not to question your political or moral beliefs, but instead to call upon your good will in being respectful of the beliefs of others while you’re at Mass, especially when lectoring.

Let us pray that the hearts and minds of all might be converted to see that every person is made in the image and likeness of God, regardless of skin color. Let us also pray for and be agents of unity in our country, community, and church.

Statement from Archdiocese of Newark:

All are welcome to worship within our churches, and we strive to create a respectful and dignified environment in which diversity is embraced and celebrated. Although parishioners celebrating within the assembly are expected to use discretion to ensure that their attire is appropriate for a house of worship, they are free to wear clothing that promotes causes and movements. However, celebrants who serve in the role of Lector — who have volunteered to serve on the altar and read from the scriptures — are required to follow the archdiocesan dress code, which is communicated during their training. The policy requires celebrants and lay ministers to refrain from wearing t-shirts as well as any clothing that draws attention to the individual and distracts from the Word of God. This is to ensure that the assembly’s attention is focused on Scripture and not on the individual proclaiming it. In response to this incident, we are asking our pastors to reinforce the archdiocesan dress code for ministers in their parish communities and to be prepared to address questions and concerns. We hope this ensures that parish celebrants and lay ministers are comfortable with the policy and the purpose behind it.