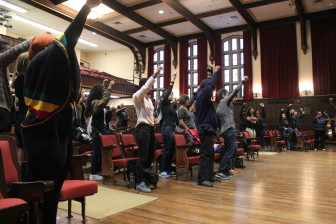 In the Columbia High School auditorium on Saturday, October 22, several African American students took to the microphone to talk about incidents large and small in which they felt profiled or intimidated by local police.

One girl spoke of being stopped in the park several years ago with two male friends after some nearby robberies had been committed. She said the police took away the boys’ phones because they could not show receipts for them.

“Because you always carry your phone receipt with you, right?” she asked sarcastically.

Another student talked about being told by a Maplewood Police officer to clear off the sidewalk outside of Underhill Field after a recent CHS football game. The young man said that he repeatedly told the officer that he needed to remain in that spot because he was being picked up and that was where he had been told to wait. Finally, according to the student, the officer drew his gun; the student then left.

(In response to a follow-up email, the student’s teacher, TJ Whitaker, said that he did not believe the student had reported the incident to Maplewood Police Internal Affairs as yet.)

“I’m scared for my male friends, my brother,” said one girl.

“In a stigma-free town, how is that possible?” asked another student.

The students spoke of their experiences at a rally in the CHS auditorium on Saturday as part of the National Day of Protest. The local rally was organized by CHS English Language Arts teacher TJ Whitaker, founder of the MAPSO Freedom School and the MAC Scholars, a CHS club for high-achieving African-American students.

On a raw and blustery Saturday, the rally, originally intended as an outdoor march that would have culminated in a protest at the Maplewood Police Headquarters, was relatively small and quiet. Whitaker periodically asked those assembled to stand and repeat some chants to get the energy in the room up, and he gently chided those who did not show up: “Justice is not dependent on the weather. … In the old days, they marched in whatever it was.”

Whitaker explained that MAPSO Freedom School — and subsequent events such as this rally — were intended for students to “speak their truth” but also as a rebuke to the #NotInOurTwoTowns event held at SOMS on July 12, which he called a “sham.”

Whitaker criticized the #NotInOurTwoTowns event for ending with police coming to the stage at South Orange Middle School and being applauded by the audience. He contended that the event did not deal with the issues of racial profiling that he and the students gathered on October 22 at CHS say are commonplace in Maplewood and South Orange.

“We have to ask the tough questions that make people feel uncomfortable,” said Whitaker.

In particular, Whitaker has been working to keep the spotlight on allegations of racial profiling by police in the two towns, particularly an event that took place on July 5 in which students allege they were herded toward Irvington after the fireworks in Maplewood Memorial Park and were not allowed to return to their homes in Maplewood and South Orange.

The incident is under investigation by Maplewood Police Internal Affairs.

Meanwhile, on October 22, Whitaker rallied with representatives of student groups including the MAC Scholars, the Black Students Union, the MLK Association and Diversity Rocks, the parent group Strength for Their Journey, Peoples Organization for Progress, Karen Weiland of the South Orange-Maplewood School District Parenting Center and Ike Onyema of the East Orange Campus High School.

“When you raise your voice,” said Whitaker, “you create the space for your righteous teachers and board members to make change.”

Contact information for Maplewood Mayor Vic DeLuca and members of the Township Committee can be found here.  Maplewood Police can be contacted at 973.762.3400.