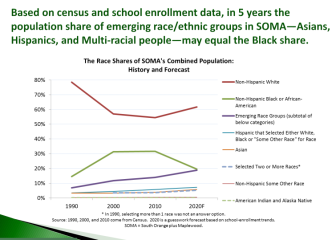 If trends continue, the White population will be over the 60% mark by 2020, with the “Emerging Race Groups” population of Asian, Hispanic and “Multi-Racial” equaling the Black population at around 20%.

These trends were described and discussed — along with other demographic information and trends — at a presentation of the study “Demographic Trends in South Orange and Maplewood” at the Maplewood Library by the South Orange-Maplewood Community Coalition on November 10.

The introduction for the report, performed by the Coalition, explained its rational: “The two towns of South Orange and Maplewood have demonstrated a commitment to racial integration through their support of the Community Coalition on Race since 1996. Stable racial integration in housing and all aspects of community life has been an essential component of the Community Coalition on Race’s intentional integration mission for 20 years. This report presents a demographic profile of the two towns over time in order to establish where we have been, where we are now, and what trends we see in residential integration in SOMA.”

Coinciding with the advent of midtown direct train service, the Coalition began a marketing program to stave off “White flight” in the late 1990s and attract White residents who would appreciate the diverse community that South Orange and Maplewood provide. Real estate tours were organized, ads were placed in publications to reach Brooklynites and Upper West Siders.

The campaign was successful — from roughly 2000 to 2010, the population stabilized.

Also, of note: South Orange tends to be more integrated than Maplewood block by block: 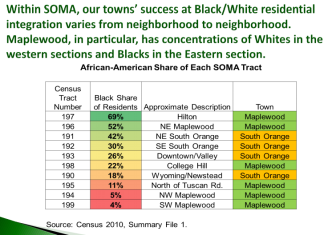 The report also drilled on racial trends in school enrollment, noting that:

Other trends and data in the report include housing trends, income trends, numbers on foreign-born residents (a whopping 23% of the towns’ population), the increase in the Asian and Hispanic populations, affordable housing percentages as compared to similar New Jersey towns, and more.

To see the full report, visit here or scroll down. Village Green will also be posting follow-up stories on individual trends and data sets in the report.

The November 10 presentation was largely just that — a presentation of the findings. Meetings and discussions on addressing the trends are forthcoming.

In the meantime, Gagnier told Village Green, “To maintain and even grow the diversity this community cherishes, we are considering strategies to attract and retain African American in-movers who have been moving here in much smaller numbers, finding their homes in other suburban communities, as well as the emerging racial groups — Asians and Hispanics — that have grown in SOMa over the last decade.”

She added: “These strategies have to be on two fronts: making sure our community is truly inclusive and offers these populations reasons to choose SOMa as their home; developing a strategic marketing plan that rivals the effectiveness of the Coalition’s marketing from its early years.”