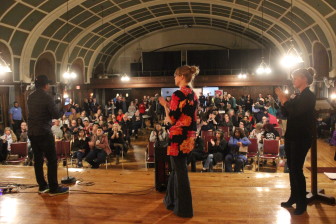 After election day, the Maplewood community found that it was a very liberal town in a very divided nation.

The question for many was, “How to move forward?”

That was the central question of a meeting tonight at The Woodland organized by Studio B and the Maplewood Artist Collective.

As speakers took to the stage, the mood varied between solemnity and humor. Some spoke of the fear of being targeted as a minority — whether by ethnicity, race, religion, gender or sexuality — in a United States led by Donald J. Trump.

Many talked about standing up for those who faced discrimination. Studio B “Honcho” Jenny Hall Turner evoked the Safety Pin movement that arose in Britain after the Brexit vote where citizens wear safety pins to let others know they are a safe place/person to approach in the face of discrimination.

And some made the audience laugh.

Barbara Velazquez, a Trustee of the Coalition on Race, urged people to laugh as a form of therapy. She also warned against “catastrophization” — reminding community members that the world was not ending.

Full disclosure: This reporter was asked to talk about the role of journalism and urged communities members to support independent journalism, citing an article in The Guardian that detailed journalism’s job in holding the new President to account, while also seeking “to understand the forces behind Trump’s victory, and Hillary Clinton’s loss” and “how many people feel left behind by America’s growing wealth inequality.”

The room was filled with hundreds through much of the evening, including many children who wrote their plans for taking action on posters.

Several attendees told Village Green that while speakers vacillated between anger and positive activism, no one called for revolution or ignoring the rule of law (e.g., there were no suggestions to petition the Electoral College not to elect Mr. Trump).

Notably, none of the speakers said they had supported Mr. Trump.

Nonetheless, Turner Hall said that the meeting had no agenda.

“Our goal is to allow people to share what needs to be shared, and to make information available,”said Turner Hall.

“It’s really important to approach this moment with openness, and with a sense of community in mind,” said Benny Campa of the Maplewood Artist Collective.

“Our community prides itself on inclusivity. That’s a great thing. But moving forward may also mean expanding our definition of ‘inclusion’ … how well do we understand the other side of the political divide?” said Marcy Thompson of Studio B.