Letter: ‘Choice is Clear’ — Lawson-Muhammad, Davis & Adamson for Board of Ed 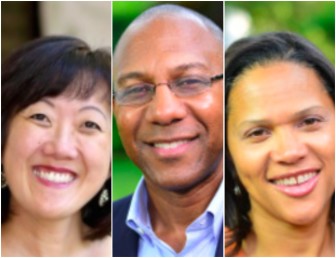 I am writing to voice my solid support for Stephanie Lawson-Muhammad, James Davis III and Susie Adamson as candidates for the South Orange-Maplewood Board of Education in the upcoming November 8 election.

In a field of five candidates who are sometimes hard to distinguish on a given issue, I think these are the three who stand out. Stephanie, James and Susie are the people who have the ability to build consensus with their colleagues and reason their way to approaches that enable meaningful educational change in our district.

All five candidates are “for the kids.” The real question is who can help forge a Board consensus on achievable, measurable objectives, build an effective relationship with the Superintendent, publicly model the trust and respect that we wish to make the norm throughout our educational community, make the staff feel valued and supported (even while holding them to high expectations) and give parents confidence that the district is responsive to their children’s needs. To me, the choice is clear.

I have been involved with our schools in one way or another for 22 years, nine of them on the Board of Education from 1997 to 2006. What I’ve learned over that time is that making positive change in schools is hard and sometimes appears impossible. That’s because schools are full of people, and, to quote Louise Patterson, a former Seth Boyden teacher, “People . . . are a messy business.” Most of the 16,000 school districts in the United States fail to deliver on their promises. Most schools that set out ambitious improvement objectives fall flat. In doing so, most blame their shortcomings on circumstances beyond their control, including impossible state and Federal mandates and inadequate financial aid. Teachers blame Central Office. Central Office blames the Board. The Board blames everybody but itself.

We can do the same or we can choose to overcome those obstacles and make our district a shining example to others. I know it’s possible. I saw it happen in a small but real way at Seth Boyden in the early 2000s. I see it in the work of many individual teachers throughout our district. I’ve read the innumerable success stories of urban and suburban schools that through patience, persistence and effective collaboration were able to transform themselves into places where all children were able to succeed.

We can do it, but we need a Board of Education capable of leading the way. I urge you to join me in re-electing Stephanie Lawson-Muhammad to the Board for a second term, accompanied by her running-mate James Davis III, together with long-time PTA parent leader Susie Adamson. In my view, they represent our best chance for a Board that is diverse in opinion, but able to achieve consensus on its course of action when it comes time to vote. That is the essential starting point for meaningful, sustainable educational improvement.