The Village Green May 27, 2020
0 FacebookTwitterPinterestEmail

Facing a $1.8M shortfall of revenue due to the COVID-19 pandemic, South Orange Village officials introduced a budget earlier this month seeking a pay freeze for all employees for two years — including police and fire unions. Village President Sheena Collum stated that the freeze would help the township avert any demotions, layoffs or furloughs while keeping the municipal tax impact down to an increase of less than 3%.

In April, Collum introduced the idea of “shared sacrifice,” saying, “The board as a whole has decided that we are not going to kick the can and sit and wait to see what is coming from federal or state government.” She detailed a $1.8M revenue shortfall that the township was experiencing in every area — from court fines, to parking tickets, to the loss of construction fees, interest on investments, general fees and permits, summer camp fees, pool fees and a projected loss of $250K in summer tax collection.

“We are pretty trued up on what this budget will be,” said Collum.

With the Superior Officers’ union of the South Orange Police Department, Teamsters Local 125, and non-union employees on board for the measure, negotiations with PBA Local #12 and South Orange Fire Unions Local 40/240 appear to be going nowhere, as evidenced by a letter sent by the leaders of the state police and fire unions to the six South Orange Village Trustees — but not the Village President — this week.

The strongly worded letter from Edwin Donnelly of the NJ FMBA and Patrick Colligan of the New Jersey State PBA decries the move to freeze salaries as political retribution by Collum. Fire union members campaigned openly against Collum in the 2019 Village President election, disagreeing with her handling of a proposed fire department merger with Maplewood; Collum won re-election by a 3-1 vote margin over challenger and former Trustee Deborah Davis Ford.

At a May 27 meeting, Collum refuted the accusations in the letter (see the full NJ FMBA/NJ State PBA letter below), while saying she applauded the work of first responders, and all six Trustees backed up the decision to ask for the pay freeze.

“I think this response from the union is very, very disappointing,” said Finance Chair Karen Hilton. “I feel very strongly that we’ve done a good job collaborating and analyzing the budget through and through.”

Finance Committee member Donna Coallier echoed Hilton’s remarks, saying the Township was “in a tough spot. We have people in our community who pay property taxes who are themselves front line workers or are restaurant workers who no longer have jobs, or are struggling because they are hourly wage earners who now have to stay home to care for kids. … We have residents who are contractors whose main source of revenue has dwindled. … Not everyone in our population lives in a big house and can afford to pay increased property taxes.”

Coallier added, “This idea of a pay freeze in face of the whole suffering of the community didn’t seem like a big ask.”

“One of the things that this misses and that I was frankly proud of is that we came together as a community and made an ask of the employees of this town and they stepped up and agreed to it because there was a genuine understanding that these are pretty tough times and we all need to make shared sacrifice to over come them,” said Trustee Walter Clarke, another Finance Committee member.

Trustee Bob Zuckerman noted that he found the letter “particularly disappointing” as the BOT sought to save all township jobs as the nation was facing 41 million unemployed.

After their comments, Collum said that Village Administrator Adam Loehner had recently shared that Teamster Local 125, representing the Department of Public Works, was coming on board with the pay freeze. Collum thanked Ken Greene of the Teamsters and well as Lt. DiEsso of the Superior Officers union.

Although many governmental bodies globally are looking at staff reductions due to pandemic-induced budget shortfalls, neighboring Maplewood has — so far — taken a different tack. Upon introducing the Maplewood budget, Finance Chair Vic DeLuca said the Township was hoping to avoid salary freezes, furloughs and layoffs.

“If we were to start talking about making cuts, that is a serious conversation that we would have to have because that is something we don’t want to do,” DeLuca said earlier this month. “That’s why we are holding off as much as possible, looking for resources outside, looking at the budget we introduced tonight to see if there are alternatives, because the last thing we want to do is cut public protection and safety,” said DeLuca.

Maplewood plans to hold a hearing and pass its budget on June 16. South Orange’s budget hearing and vote is scheduled for June 8.

Village Green downloaded the NJ FMBA/NJ State PBA letter from TapintoSOMA after verifying its authenticity (NJ FMBA posted the TapintoSOMA story on its Facebook page). Calls and texts to Donnelly have thus far gone unanswered. Village Green has been reaching out to PBA Local #12 and FMBA Local 40/240 members since April 29 for comment. 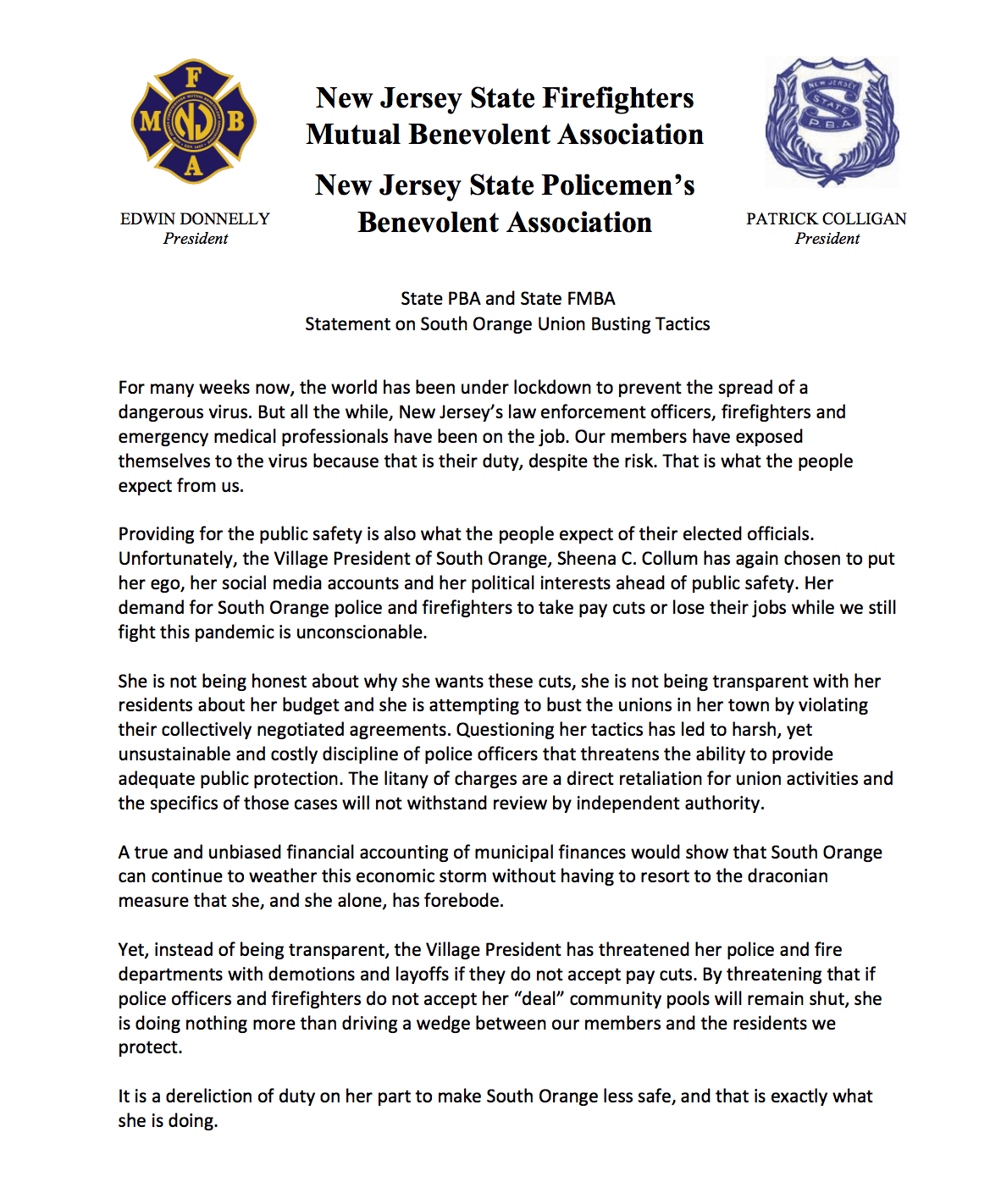 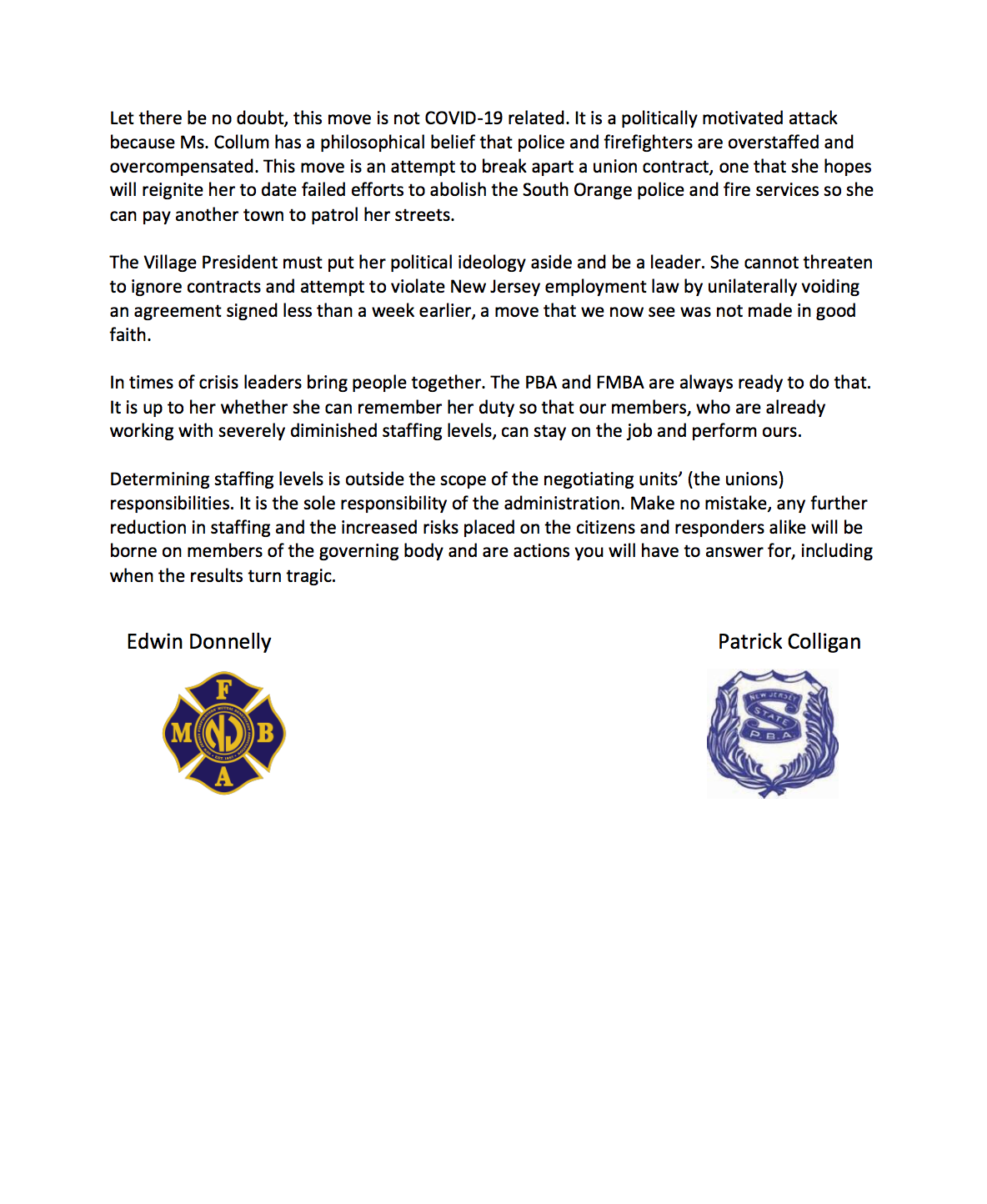