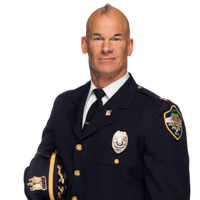 Capt. Kyle Kroll, a 28-year veteran of the South Orange Police Department, will become the next South Orange Chief of Police, as announced by Village President Sheena Collum at the Feb. 22 Board of Trustees meeting.

Collum noted that Kroll, who is currently Acting Chief, will replace former Chief James Chelel who retired effective Dec. 31 to take on position in the private sector.

Although the loss of the progressive and popular chief hit the town hard, Collum noted that Chelel’s departure “created an opportunity to look at how we deliver police services.” Collum said that she and Trustee Jeff DuBowy, chair of public safety, took a long look at policing in South Orange, considering various models such as chief vs. director, choosing a new leader from within or without the department, and also made a tour of Maplewood police headquarters to consider ideas such as merging or consolidating.

Ultimately town leaders made a decision that Collum said has the “unanimous” support of the Trustees and town administration: appointing Captain Kyle Kroll as Chief. Kroll has been with the SOPD for 28 years, as a captain for the last 13 years and before that serving five years in the detective bureau.

Collum noted that due to “logistical issues” (Chelel has accrued leave through the end of April), Kroll would continue to serve as acting chief until that time.

Trustee Steve Schnall had words of praise for Kroll and Chelel: “We all felt a loss with Chief Chelel stepping down, but we are very, very fortunate…. Good for South Orange!”