In Maplewood, Police Reach Out to Clergy to Forge Community Relations 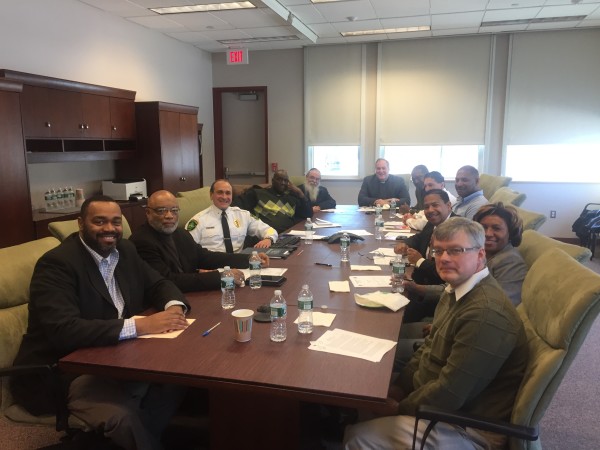 As police departments across the country look for ways to engage better with their communities, the Maplewood Police Department is going right to the top — working with local clergy.

Maplewood Police Chief Robert Cimino has organized the Clergy Alliance, a group of local clergy of all denominations that has been meeting every other month for almost a year.

The Alliance grew out of the relationship between Cimino and the Rev. Terry Richardson of First Baptist Church of South Orange. The two met at an awards ceremony for a mentoring program created by former Sgt. Mike Morrison, a member at First Baptist.

“We maintained that relationship,” said Cimino. “And then when these [national] incidents have arisen generating questions about community relations, it prompted me to pick up the phone.”

Cimino said he and Richardson were aware of clergy alliance programs in other towns and cities.

“We did research, drafted an outline. I asked the Reverend who would be interested,” said Cimino. “We sent out invitations and out of that got a meeting of nine members” — including Mike Morrison who himself is now in divinity school.

Cimino said he is continuing to reach out and hopes to add more clergy members.

Richardson outlined a number of ways that clergy can help police/community relations: “Clergy can serve as a liaison between the police and the public and be relied upon to share accurate information with their parishioners on larger matters of justice involving the community at large,” said Richardson.

Richardson also added a number of other roles: “Clergy can serve as chaplains for the police department by offering counseling guidance, or a listening ear to offices. Clergy can serve officers and residents, by helping defuse matters before they get out of hand. Trained clergy can be called to a scene during or after a police encounter to speak or counsel with family members. Clergy can sponsor police/community events at their Houses of Worship that promote a non-confrontational setting and build police/community relationship.” And, finally, “Clergy can serve as a first call from police for juveniles on small petty issues as intervention before they get caught up in walking down the wrong path.”

Cimino noted that Rev. Durwin Johnson, who lives in town, has also been a tremendous asset to the alliance. Johnson is a member of the Juvenile Conference Committee, a diversionary program for juvenile offenders who have committed crimes that do not merit a County Court hearing. The Juvenile Conference Committee coordinates with the MPD’s Youth Aid Bureau, providing consequences for youth without putting them into the criminal justice system. The JCC and the Youth Aid Bureau also provide referrals for state and federal assistance programs for youth, said Cimino.

Cimino reports that over the past 10 months the alliance has discussed its draft policy, participation requirements and goals, and training subject matter. He said that the draft policy has been refined and is almost ready to “get in place and start training.”

Cimino noted that several members of the alliance attended the MPD’s Valor Awards and Citations in May. In addition, police attend events run by the clergy. “We try to support each others’ events,” said Cimino. The Chief added that he works to have “rank-and-file” officers attend clergy events so that they become more familiar to the community.

“A goal is to have programs where officers meet with parishioners after services and have presentations,” said Cimino.

Next, the alliance is looking to borrow an idea from other towns — including South Orange — and introduce “Coffee with a Cop” events. “Just as South Orange invited us to their Coffee with a Cop, we will invite them,” said Cimino. Cimino also noted that South Orange Police Chief James Chelel has an open invitation to attend Clergy Alliance meetings.

“A real dialogue is taking place between the faith community and the Maplewood PD,” wrote Richardson in an email. “Both parties understand the positive impact building such a relationship can have on the Maplewood community at large.”

Richardson added, “This project is not a ‘feel good’ story. On the contrary. The alliance is a venture we hope the community comes to recognize, take advantage of, and embrace…. We hope to educate and debunk some of the concepts about law enforcement in general, along with ill-informed social myths and opinions about law enforcement and black males. The faith based community and police share a passion to serve the people who live, work and visit Maplewood —and South Orange. Together we agree to care for our community in a proactive way by building relationship together can helping to connect police and people.”

The alliance is also about transparency and open and honest communication. Cimino said that one of the training sessions included an overview of the Internal Affairs process for the State of New Jersey. “Right off the bat, we gave them a lot of information on how to hold us accountable and an awareness of the process to make a complaint, but we also explained the procedure and the protections that officers have,” said Cimino.

“Hopefully this is one of the ways to build trust,” added Cimino.

Support for the program goes beyond the Maplewood Police Department to the leadership of the Township as a whole. In an email, Maplewood Mayor Vic DeLuca commended Cimino “getting this off the ground.”

“As we watch police and community relations deteriorate in communities around the country,” said DeLuca, “we thought it was prudent to be proactive and build stronger bonds of trust now. We wanted a vehicle to obtain input from local religious leaders and share with them our policing practices and procedures. Chief Cimino was very enthusiastic about setting up the Clergy Alliance and has already had very productive meetings of the group.”

Maplewood Committeeman Marlon K. Brownlee, Chair of the Public Safety Committee, has also been supportive of Cimino’s efforts and those of the Alliance: “I have long believed — and tried to live up to the ideal — that as former presidential candidate Shirley Chisholm once said, ‘Service is the rent we pay for the privilege of living on this earth.’ At its deepest core, I also believe that all true religion promotes peace, and that for our community — indeed, for all communities — this is a wonderful vision to share and to work for. As President Obama remarked when delivering the eulogy of Reverend Clementa Pinckney, for believers, their calling is ‘…not just within the walls of the congregation, but…the life and community in which our congregation resides.’ In agreeing to come together and work collectively to find ways to make our community better, I believe that these leaders — Jewish, Christian and Muslim — are personifying the best aspects of that calling from their respective faith traditions.”

Richardson said that Maplewood — and South Orange — are far surpassing other towns in their outreach efforts:  “The factthat  Chief Cimino and the Maplewood Police Department have gone as far as calling the clergy to a round table on this idea speaks volumes. I have had the pleasure of working with Chief Cimino in the past. However, this is big! When I look around, I see one or two local models in the area, but the potential here is much larger. Ours in an interfaith of clergy alliance model the Chief has helped envision and embrace.”

One thing is clear: Enthusiasm for the alliance is high on all sides.

“Two things have surprised me about the alliance initiative,” added Richardson. “First, the number of Maplewood officers and clergy members who have expressed what seems to be sincere enthusiasm about the project. Each time I speak with an officer from the Maplewood Police Department about the initiative, their excitement energizes me. There is also a core group of clergy whose passion for this project helps fuel our determination.

“The second thing that surprises me about the initiative are the phone calls I have received from other houses of worship outside of Maplewood who heard about aspects of the initiative and asked me to share insights on ways faith institutions can get similar things started in their context.”