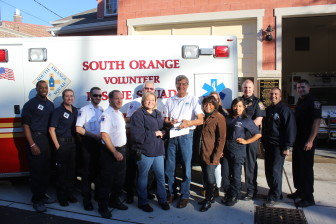 With the disbanding of the Maplewood First Aid Squad, announced this summer, Maplewood has entered into a mutual aid agreement with the South Orange Rescue Squad.

While Maplewood’s first line of response for medical emergencies will be Maplewood Fire Department EMS personnel, SORS will be the second agency on call, said Mayor Vic DeLuca.

DeLuca and Committeewoman India Larrier were on hand to sign the agreement on October 15 with Melanie Troncone, Jeff Hark and Dan Cohen of the South Orange Rescue Squad.

Larrier, who was a leader of the Maplewood First Aid Squad, noted with sadness that the Maplewood squad had disbanded, calling it “a loss,” but she was positive about the new agreement. “We still have some new blood,” said Larrier, who said she was also happy to see the “two towns working together.”

Although the agreement does not involve a monetary fee, Maplewood is working to help SORS obtain insurance for its Maplewood coverage and is looking for SORS to utilize the former Maplewood First Aid Squad building on Boyden Avenue as its “Maplewood Division.”

DeLuca noted that the former Maplewood First Aid Squad building was receiving a facelift: Avalon Bay, as Maplewood Urban Renewal LLC, is using the building as an office during construction of its a 235-unit apartment complex at the former PSE&G site at the corner of Springfield Avenue and Boyden Avenue. As part of the rental agreement, Avalon Bay is refurbishing the building which will again be used to house staff and ambulances when construction is completed.

Meanwhile, SORS is operating out of a brand-new state-of-the-art facility on Sloan Street in South Orange. On Saturday, after the signing, SORS Capt. Dan Cohen showed off the space, complete with bedrooms, kitchen, lounge, conference room — and some photos of actor and comedian Zach Braff back when he volunteered on the squad as a Columbia High School student.

The volunteer squad continues to grow and serve due to its successful fundraising efforts. Maplewood residents will soon be receiving donation solicitations; however, those who want to reach out proactively can visit www.southorangerescuesquad.org.