The following is from a Columbia High School Parent: 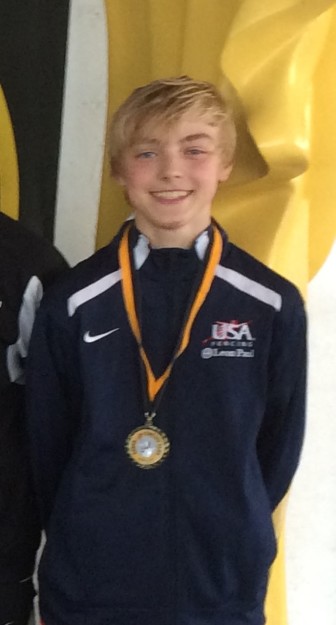 Woods, who is now a freshman at Columbia High School, competed against 87 high level foil fencers from around the country in this event. He won all the initial pool bouts convincingly which seeded him overall at number one going into the direct elimination bouts. In the final bout Woods defeated Eric Zobel from Seattle 15-11.

Woods trains at the new V Fencing Club in Livingston, under the tutelage of his long time fencing coach Serge Vashkevich. Coach Vashkevich says, “Jack continues to fence well in the older divisions and thrives in the more challenging events. This year he will be cutting back on a number of the international tournaments he will compete in, in order to focus more on the demands of  High School.”

Camille Pham who is a senior at CHS and fences on the CHS women’s foil team, won the Gold medal in the Women’s Foil  A2 event with 30 competitors at this same Cobra Challenge RJCC Region 3 tournament. Camille received her A2016 rating after her win.

Zander Rhodes, who is in eighth grade at South Orange Middle School placed 9th in the Cadet Women’s Foil A2C3 event at this same tournament when she competed against 65 17 years and under foil fencers.