The following is from the Colombia Cross Country Team: 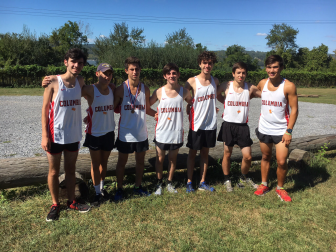 Five runners scored for each team based on the place they finished. For the Cougars, the team was paced by two Top 20 medal winning performances: Senior Jared Pangallozzi finished 8th in 16:36.8 followed by junior David Ives in 18th place. The other runners scoring for the Cougars were junior Tim Depue (47th), junior Avery Coreschi (53rd), and junior Jonathan Salinardo (60th).

The next cross country meet for the boys varsity team will be Wednesday, October 5 when they compete in the Super Essex Conference (SEC) Championships at Branch Brook Park in Newark. The meet begins with the freshman race at 3:00 p.m. and concludes with the varsity boys race at 5:20 p.m.