Tickets can be purchased online or at the door 90 minutes before each performance.

This year, there is a special opportunity for 6th graders to see the performance for free (if accompanied by a paying adult), and participate in a talk-back with CHS Principal Elizabeth Aaron and the show’s directors and stars. See more information at the end of this article.

For more about the show: 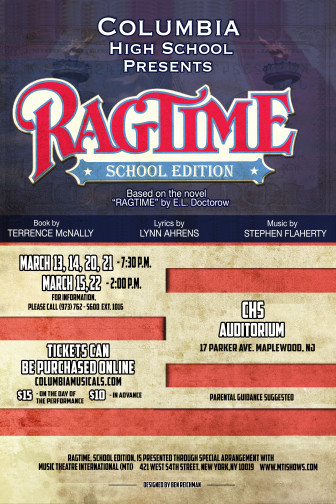 Based on the novel of the same name by E.L. Doctrow, Ahren’s and Flaherty’s Ragtime is a compelling epic capturing the American experience at the turn of the 20th century. Tracking three diverse families in pursuit of the American dream in the volatile “melting pot” of turn-of-the-century New York, Ragtime confronts the dialectic contradictions inherent in American reality: experiences of wealth and poverty, freedom and prejudice, hope and despair.

Over the course of the show, the worlds of a wealthy white couple, a Jewish immigrant father and his motherless daughter, and an African American ragtime musician intertwine. Together, they discover the surprising interconnections of the human heart, the limitations of justice and the unsettling consequences when dreams are permanently deferred.

Featuring many of the historical figures that built and shaped turn-of-the-century America, including J.P. Morgan, Emma Goldman, Harry Houdini, Evelyn Nesbit and Henry Ford, this musical sweeps across the diversity of the American experience to create a stirring epic that captures the beats of the American experience: the marches, the cakewalks and – of course, the ragtime.

Some language and situations may not be suitable for children. Parental guidance is suggested.

Isaiah Thomas and Chanel Pearson star as Coalhouse Walker, Jr. and Sarah. Father is played by Luke Grzelewski and Mother is portrayed by Ali Pease. Tateh is played by senior Russell Pinzino.

We are excited to introduce a unique theatrical and educational opportunity for the 6th graders of the South Orange and Maplewood School District.

On Sunday, March 15th, we are inviting 6th graders to attend the 2 p.m. matinee performance for FREE if accompanied by a paying adult. This special event will include a “TALK BACK” with Ms. Aaron, Principal of Columbia High School, the directors and stars of the CHS production of RAGTIME immediately following the performance. This event is by reservation only!

The short presentation will allow our students a chance to make connections between what they have learned in the classroom and what they’ve seen on stage.

TO MAKE A RESERVATION . . . once an adult ticket has been purchased (visit Columbiamusicals.com), email Mr. Healy, Assistant Principal at Columbia High School at mhealy@somsd.k12.nj.us by midnight, March 12th. Please put “TALK BACK” in the subject line. The email should include the name of the adult and the name of the sixth grade student. ONLY ONE FREE TICKET PER ADULT PERMITTED. Tickets, if available, will be sold at the door.