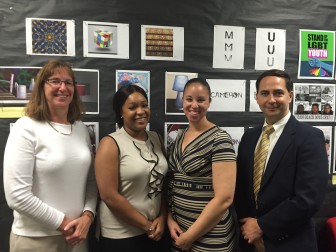 At their August 22 meeting, the SOMSD Board of Education approved the appointment of four new administrators:

Mrs. Gronau received her MA in Administration & Supervision from Montclair State University, NJ and her BA in Psychology from Vanderbilt University, TN. Dara recently served as district supervisor of ELA and Media in Ridgewood Public Schools and served as High School Principal at West Side HS in Newark, NJ. She is also a graduate and track star from Columbia High School. Prior to her appointment as principal in Newark, Dara served as the high school assistant principal at West Side HS in Newark, Resident Principal in the New Leaders for New Schools program and teacher for Teach for America. Mrs. Gronau will begin on August 24.

Upon her appointment, Mrs. Gronau said, “I’m absolutely thrilled to be returning home. The last time I was in the room, the relay team was being recognized, so I feel that I have come full circle. I look forward to working with Maplewood Middle School – I understand that it is a wonderful staff that is strong, experienced, and ready to do great things. I can’t wait to work with staff, parents, and especially students.”

Ms. Green received her MA in Educational Leadership, Management and Policy, her BS in Elementary Education and her BA in Communication from Seton Hall University, NJ. Most recently, Bridgett served as a trainer for the East Orange Department of Special Education Services, and was the LRE District Specialist. She also is currently the NJIT pre-college program instructor for Grade 6 students. Prior to her appointment as the trainer for the East Orange Department of Special Services, Bridgett served as elementary school teacher of English/language arts in East Orange, NJ. In addition to the above, Ms. Green also served as the site supervisor/principal for the East Orange Summer Extended School Year Program. Ms. Green’s work as school leader and background in teacher training/LRE speaks to her strengths to cultivate relationships and lead instructional programs. Ms. Green is projected to start on October 22.

Dr. Murray received her doctorates in administration & leadership studies at Indiana University of Pennsylvania, a MS in Education, Development and Strategies from the University of Wilkes and a BS from the University of Scranton. Dr. Murray served as a High School Principal at Abington Heights School in Clarks Summit, PA and also served as Assistant Principal overseeing the day to day operations of 15 academic departments and student affairs. Dr. Murray also served as a science teacher prior to her promotion to administration. Dr. Murray’s work as school leader and background in leadership speaks to her strengths to cultivate relationships with students, staff and families to ensure that all students’ educational and social needs are met. Dr. Murray will start on August 22.