[Editor’s note: Laila Gold is a member of the MAPSO Youth Coalition and an organizer of the march.]

On Saturday, July 4th, the MASPO Youth Coalition (MYC) hosted an “Independence from Independence Day,” march, leading a crowd of over a hundred energized participants through Maplewood and South Orange to protest the celebration of the national holiday. Community members, including students, SOMA Action, SOMA Justice, and Community Coalition on Race representatives, as well as local government candidates joined the rally, which started at Flood’s Hill in South Orange.

Event organizers Jordan Muhammad, Deborah Ode, and Sylvie Schuetz spoke about the reasoning behind the protest. The group, who were dressed in all black to show solidarity with the Black Lives Matter movement, walked towards Maplewood, chanting their demands along the way.

At Farrell Field, Essex County Freeholder candidate Sabre Burroughs talked about the value of mutual aid, voting, and community, advising the crowd: “You are not ready to defund the police if you don’t have a community that looks out for each other.” District 10 Congressional candidate John Flora emphasized the importance of voting and encouraged attendees to fill out the 2020 census.

In Maplewood’s Ricalton Square, Ty Dorvil and Ben Morris spoke about white privilege, action, and de-escalation, as volunteers held up QR codes and links to petitions for everyone to sign. The crowd headed toward Memorial Park, stopping only to encourage the people sitting outside of downtown restaurants to join and take action. Current and former students were called to speak publicly about their suggestions and interests regarding defunding the police. Recent graduate Riley Hubscher said that “Regarding mental health issues, police don’t need to be extending themselves there. We can find other people.” 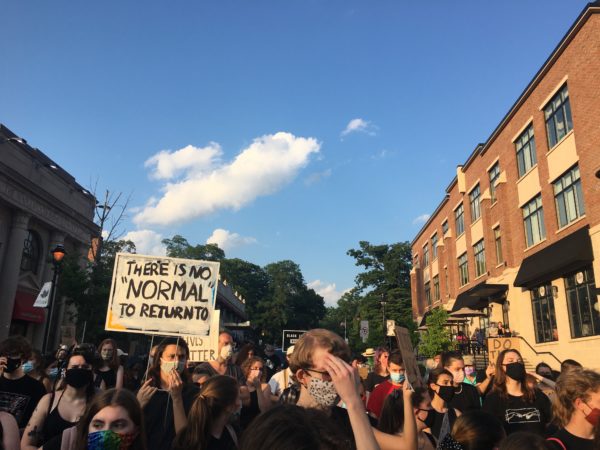 Directly opposite Maplewood Town Hall, Muhammad elaborated on the group’s demand that July 4th celebrations be canceled, focusing on the persistent problem of racism in America. The Fourth of July celebrates the adaptation of the Declaration of Independence, a document that is most known for this sentence: “We hold these truths to be self-evident, that all men are created equal, that they are endowed by their creator with certain unalienable rights, that among these are life, liberty and the pursuit of happiness.”

“This was an aspirational promise so we actually have to aspire to it,” said Muhammad. Most of the white, male authors of the declaration were slave owners. As Frederick Douglass reminded the Rochester Ladies Antislavery Society in his speech, “What to the Slave is the Fourth of July…The rich inheritance of justice, liberty, prosperity and independence, bequeathed by your fathers, is shared by you, not by me.” This thought was emphasized by Muhammad, who pointed out, “the America then was not for the people.” Ode added, “The whole idea of an Independence Day is freedom, but how can we celebrate freedom when people weren’t free when this holiday was made?” 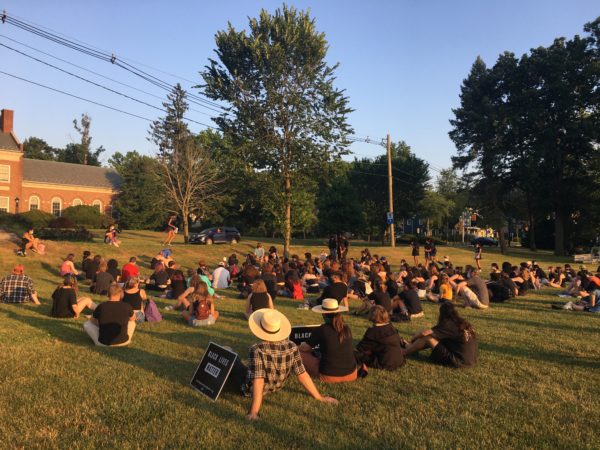 The official demands of the MAPSO Youth Coalition, delivered by student organizers Makenna Davis, Emmy Cramer, and Laila Gold, include:

The march ended at Columbia High School, where Community Coalition on Race president and SOMA Action co-founder, Kelly Quirk, spoke about youth activism. “Youth collectives are wonderful and amazing because they teach you leadership skills; they teach you how to find your voice,” said Quirk. “But it’s also really great when you can work and bring that youth collective in with adult groups who’ve been doing the work for many years.”

Students Olivia Brash, Meskie Hyman, Jessica Holdbrook, and Makenna Davis presented an ongoing project, a “Student Bill of Rights,” that includes aims to address racist practices, among other problems, of the district. The event came to a close with Muhammad leading the group in the singing of “Lift Every Voice and Sing”, a song that is considered to be the black national anthem.

The MAPSO Youth Coalition is a horizontal organization consisting of local high school students and recent graduates who all share a passion for racial justice, education, and action. The group formed in early June, after the national resurgence of the Black Lives Matter movement, and currently has about 25 active members. Since then, they have hosted a virtual Essex County Freeholders panel with the West Orange Youth Caucus and Juneteeth picnics with SOMA Justice and have made themselves and their demands heard by showing up to both South Orange and Maplewood town, school board, and police review meetings, which they will continue to do. They also plan to continue their advocacy for their demands by contacting officials from the towns directly.

It was at a “Student Bill of Rights” planning meeting on June 30 that the idea to have a protest on the Fourth of July was devised. After voting on whether or not to plan such an event in five days the members, many of whom had previous experience in organizing and leading events, quickly began to design a route, craft a schedule, and create flyers. A press release, demands, and statements were soon drafted and speakers contacted. By Friday, only small tasks remained. “It’s such an amazing experience to be surrounded by kids that are passionate about the same thing you are and who want to work together to better our world and to better our own community,” said organizer Hyman.

The organizers want to thank SOMA Justice for their generous donations and help and they are grateful to the speakers and student volunteers for their efforts. They want to encourage everyone to continue educating themselves and to get involved in the MAPSO Youth Coalition. You can find them on Instagram and Facebook @mapsoyouthco and can email them at mapsoyouthcoalition@gmail.com.