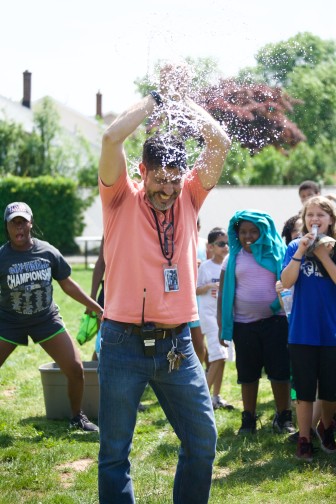 After 10 years of leadership at Seth Boyden Demonstration School, Principal Mark Quiles retired this June to spend more time with his family and on his performing career.

While the Seth Boyden community wishes Quiles well, he will be missed.

I first met Quiles in the winter of 2006/07 as I toured the school, considering whether or not I should opt in for my rising kindergartner.

Quiles impressed me. He listened. He asked questions.

And the school impressed me. The hallways were buzzing with energy, but there was also a clear sense of order. That balance between creativity and discipline is a hard one to strike, but Quiles and his team were able to deliver it in short order and maintain it over the years.

(I should also note that, when I have covered stories about Seth Boyden, whether flattering or critical, Quiles has always been professional, helpful and open, regardless of the topic or angle of the story.)

In her tribute to Quiles in the Seth Boyden 2015/16 yearbook, former PTA President Tia Swanson wrote:

“Mark Quiles arrived at Seth Boyden a decade ago, with the school in the midst of crisis. His immediate predecessor, the latest in a string of short-lived principals, had departed mid-year. Parents who were able to were pulling their kids, and its future was uncertain. When school started that September, however, there was an immediate change of tone: music in the hallways, signs up about expected behavior, the principal a constant presence in the hallways, the cafeteria and the classroom. The change was immediate and long-lasting.

“Seth Boyden now counts itself among the best run schools in the district, with a whole boatload of well-behaved, friendly children who care for the school and each other. A decade has seen lots of change, so much of a positive and so much of it bound up with the leadership shown by Mr.Quiles. We will miss him greatly, we are deeply indebted and we wish him nothing but the best as he embarks on his new adventures. We hope he knows he always has a place in the school’s history and in our hearts.”

As a school principal, Quiles has not always connected with every parent — no principal does. We who have worked with him also like to rib him about his enjoyment at addressing audiences — at length. But he enjoyed wide respect and has attracted legions of parents to contribute their time and resources to the school. And Quiles seemed to have a knack for connecting with the students, from the most timid kindergartner to most disaffected, too-cool-for-school 5th graders.

Said Seth Boyden parent Caryn Rosenberg: “When we first were thinking of switching to Seth Boyden, I had a conversation with Mark, he began to speak about the school and about these ‘individuals.’ Referring to the students…he had me at ‘individuals.’ We have been happy to be at Seth Boyden since. Mark knows every kid by name. He wants all the kids to succeed and cares deeply about showing these kids that everyone makes choices – and helps guide them to making wiser choices. He shows them respect, in fact that is what I see at Seth Boyden. I see and feel respect the staff have for the children. I want to thank Mark for his dedication and wish him well in his future endeavors.”

Seth Boyden teacher Jillian Gergel had her 4th grade class writing poems as a collective gift to Mr. Quiles. The students did not need any coaching.

One, from a student named Yahmir, read:

Dear Mr. Quiles,
You are magnificent, responsible.
Quick to solve problems.
Understanding, important and loving.
Extraordinary and successful.
You will always be remembered.

Another student (Kristina Powell) called Quiles “better than chocolate cakes” and said “maybe some students will give you a call” in retirement to “ask how you are.”

Finally, Gergel’s own child Riley, a second grader in Ms. Connell’s class, insisted on writing a letter to Quiles. It read:

Mr. Quiles, you are smart
and you like to use a chart

You’re the best
You pass the test