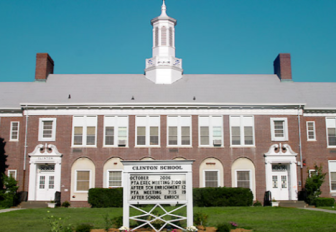 Clinton School’s 23 classrooms and 4 portables are fully utilized — with enrollment projected to increase.

The South Orange-Maplewood School District will see continued enrollment growth and a lack of space across all schools and across all grade levels in coming years.

That’s according to Ross Haber, who presented a preliminary “Redistricting – Current Utilization of Schools” report to the South Orange-Maplewood Board of Education on Monday, October 17.

Haber has spent the last three months visiting all the facilities in the district, pouring over data and talking with building leaders and staff.

He based his enrollment projections on current numbers and the trends of the last five years.

Haber told the Board of Education that the current number of enrolled students is 6,963 but that that number would grow to 7,243 by 2021/22.

Haber said that K-5 growth should be stable over the next five years but said that that description was “deceptive.”

“‘Stability’ is a very high enrollment rate. That’s not a good thing. You’ve got an ongoing problem.”

“This district has grown significantly over the last five years and will continue to grow,” said Haber.

“What is driving this growth?” he asked.

His answer: Home sales in Maplewood and South Orange.

Over the last five years, 1,500 or so home sales had generated about 335 new students in the school district, said Haber. (He noted that that number did not include the fact that some of the families who came in were sending students to private or parochial schools and that some children were still in private preschool programs.)

“The housing market is active and it is bringing children into this community,” said Haber, who calculated that for every 100 homes sold, more than 30 children entered the school district.

Echoing the statements of local town leaders, Haber said that the new multifamily housing developments in the two towns were not driving the enrollment numbers.

“There has been some multifamily, but when I ran the addresses [for South Orange] against the school file, they produced no children,” Haber said, adding that he hadn’t “gotten Maplewood data back” yet. Haber said that the 200+ units that are ready to be built “look like transit-oriented developments” which are “not conducive to generating kids.”

However, he said that the construction of multifamily housing is something that the district should keep an eye on, since empty nesters could be selling their single family homes to families with school age children because they now have somewhere to downsize within the community. “The apartment buildings may not directly impact the schools,” said Haber, “but [there] may be people selling their homes to people with kids and staying in the community…. Even without a direct correlation to the schools, they can have an impact.”

Looking at facilities, Haber noted that all the elementary schools are operating at capacity and that almost all would experience shortages of classrooms in the near future.

For example, Clinton School has 27 classrooms available: 23 in the building and four portables outside, but the school would be short two full-size classrooms next year and its shortfall would peak at three in 2018/19 before reducing to one, then zero.

“At best, you are a full house,” said Haber.

Seth Boyden, however, is also operating at full capacity with 20 classrooms and 6 portables. “They are fully utilized,” said Haber.

Haber gave less detailed information at the middle school level but noted that Maplewood Middle School enrollment would reach as high as 869 students in coming years.

At CHS, he noted that “class sizes are currently very large.”

His summation: At the elementary level, most schools are fully utilized and will see shortfalls of space in coming years with “no chance of getting rid of portables.” Haber said that there are a number of programs in shared spaces such as ELL and occupational therapy and that “building principals have been very creative but are reaching limits.”

Middle schools are also showing growth and increasing class sizes. At the high school, Haber said he needed to do more work but clearly class sizes are growing.

He noted that he had “had the privilege of sitting in on a strategic planning meeting” and the district had “a lot to do and you need the room to do it.”

Haber also had something very nice to say about the district: “For the life of me, I cannot understand [living here and] sending kids to private schools — after spending three months in this district.”

Village Green will update this story with a copy of Haber’s preliminary report to the district as soon as it becomes available.