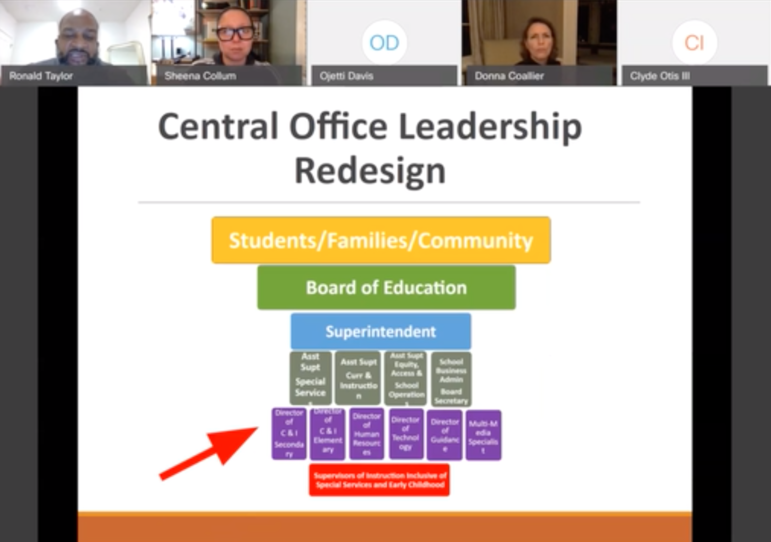 Superintendent of the South Orange Maplewood School District, Dr. Ronald G. Taylor, gave a one-hour presentation on equity across the school district at the South Orange Board of Trustees meeting on Sept. 29 in response to a request from the Trustee Donna Coallier.

During the presentation, Taylor shared dismaying numbers on equity in high school AP classes, but outlined initiatives that he said would lead to “authentic” change.

“What we’d like to do is talk about racial equity, and other equity, LGBTQ, gender [and] economic diversity in the schools,” Coallier said in introducing Taylor. Coallier seemed to indicate surprise that the newly appointed Asst. Superintendent for Access & Equity Dr. Gretel Perez was not joining Taylor at the meeting. Taylor indicated later in the meeting the Perez was still in the process of joining the district.

“We want to really get a sense for your vision on these matters and understand how you’re tracking the progress and how students and their parents can share with you the concerns that they have about these matters,” said Coallier.

The presentation’s purpose, as stated by Taylor, was, “To share how we support children of color and other vulnerable populations in the South Orange and Maplewood School District.” The presentation addressed “Demographics of high-level courses; Demographics of student disciplinary actions; Professional Development for staff; and, Staff monitoring and accountability,” and the “Digital Divide [along with a] Virtual Update,” as listed in the presentation.

With regard to the doubled increase in students identifying as multi-race Taylor mentioned that all of the students and their families are self-identified. “A family can change their child’s information while they are enrolled in our district,” Taylor said.

Enrollment data for the current school year is not yet available due to the fact that the official school count for New Jersey will be on Oct. 15. Taylor said that more up-to-date information would become available as the school year progresses.

After highlighting decreases in Black student enrollment in AP Chemistry and Physics from the two previous school years, Taylor said there was an important element to keep in mind.

“One thing we always have to remind ourselves is that there are no silver bullets, there’s no magic bean,” Taylor said. He said it was the job of educators to find a way to change the disparity of minority students in advanced level courses and that the district is committed to do so with actions that are authentic and lasting, that would help students be successful.

Taylor also spoke on the psychology that may be impacting a student’s academic decision making.

“One of the reasons why students are not enrolled in some of these [advanced level] classes is because none of their friends are also enrolled in those classes,” Taylor said. “Intentional integration initiatives [are] not just a feel-good story, it’s a way for us to impact deep outcomes as well, in a generational type of way.

He described a “de-tracking pilot that we are starting this year” at Columbia High School, creating classes that have multi-levels within them where students are allowed students to move between the levels after the first marking period, and which include a rubric to grade and differentiate the students within the same class.

Taylor noted that, “When talking to students about why they are not enrolling, because none of their friends are enrolled…. it speaks to the need to ensure that our elementary schools closely adhere to the demographics of our community.”

Taylor said that the district leadership was also holding presentations for elementary teachers around honors and AP classes at the high school. He said that they had shared video of a presentation from last Jan. 8 with Dr. Elisa Boddie speaking on the impact of disparities and creating a connection between grade school and high school and outcomes for students of color. Elementary teachers had also attended presentation on the Long Range Facilities Plan and the progress of the Intentional Integration plan, both of which will primarily impact elementary schools. “For many of them this was the first time they had heard this information,” said Taylor.

Notably Taylor said that, during presentations of the high school AP demographic data to elementary teachers, “You could hear kind of an audible gasp.”

“Wow,” said Village President Sheena Collum as Taylor concluded, “You sure do like your power points.” She commended Taylor, “You’ve been very forthcoming and transparent with the governing body, especially taking the time tonight at the urging of Trustee Coallier to address some of these concerns we had so we had a better understanding when our constituents had questions for us, we could relay it back to them.”

“We’re far from where we want to be,” said Taylor, “but we have to keep our eyes on the prize.”

Trustee Walter Clarke asked, “What will success look like? Is it just a numbers game?” asking if, for example, the district was looking for AP numbers to match the demographic profile of the school.

Taylor noted a lot of turnover in administration in recent years and a number of “quick fixes” that had been implemented. He said that the district wanted to review all those “fixes” to ensure consistency and effectiveness. He said he wanted “not seat fillers” but kids in AP/honors who were “authentically engaged.”

As Taylor had said earlier in the presentation, “It’s our job to put in supports and interventions that are authentic.”

With regard to information that Taylor had presented in addressing the digital divide between white and Black students, Coallier said she was really pleased to see some progress “particularly the leap-frogging that is happening digitally. Although I don’t like COVID, I’m glad to see that happening as a result of COVID.”

But she also worried that some students are leaving the district and wondered if the district is doing exit surveys. “How are you taking the pulse on that?” Coallier also expressed concern about the disciplinary data: “The numbers are similar for white and Black students, but the populations are not similar … . To me that’s a worrisome trend particular because I’ve been focusing on policing. Is that somehow trickling into our schools?”

Trustee Summer Jones noted that the school district did have “a lot of information up” on its website and that the Trustees were receiving and reading the superintendent’s weekly newsletter.