Aerial Photos and Red Balloons: How Tall will the Post Office Building Look?

Maplewood Township released an aerial photo Monday that shows the heights of the Post Office and surrounding buildings located on Maplewood Avenue in the Village.

The photo, prepared by Minno Wasko Architects for JMF Properties — which is in negotiations with the town to develop the building on the site of the Post Office — shows the roofs of Village Coffee, Bank of America, Kings and the Maplewood Movie Theater, labeled with each building’s height at its tallest point.

“…the frontage of the new building along Maplewood Ave is limited to 30 feet,” said Mayor Vic DeLuca, who forwarded the photo to The Village Green. “Just like a number of other buildings there, it is higher in the rear and set back from the front facade.”

The highest building in the Village is the rear of the movie theater, which rises to 58.2′.

Here are the height measurements of the other buildings in the photo:

DeLuca said the photo was done for the developer’s site plan and there “will be more elevations coming” that will be released once the site plan is negotiated. The Village Green reached out to architect David Minno for more information. We will update this article when we receive more information.

The new four-story, mixed use building proposed by JMF on the site of the former Post Office will rise to a total height of 53′ at its highest point if proposed amendments to the redevelopment plan are passed by the Township Committee. (The 53′ does not include mechanicals and other equipment that go on the roof; these will be boxed in and set back as far as possible from street level).

However, along the street level on Maplewood Avenue and on the Ricalton Square side, the tallest the building can be is 30‘ (plus another 3’6″ with a parapet), with upper floor setbacks.

The height and the setbacks have been sticking points for some residents, and for the Maplewood Planning Board, which recently expressed “significant concern” about the building’s visual impact if its size is increased.

The vote on the most recent Post Office plan had to be tabled at last week’s Township Committee meeting because of a technical error in publishing the plan. The TC will vote on the plan — and will hold another public hearing — on February 3. 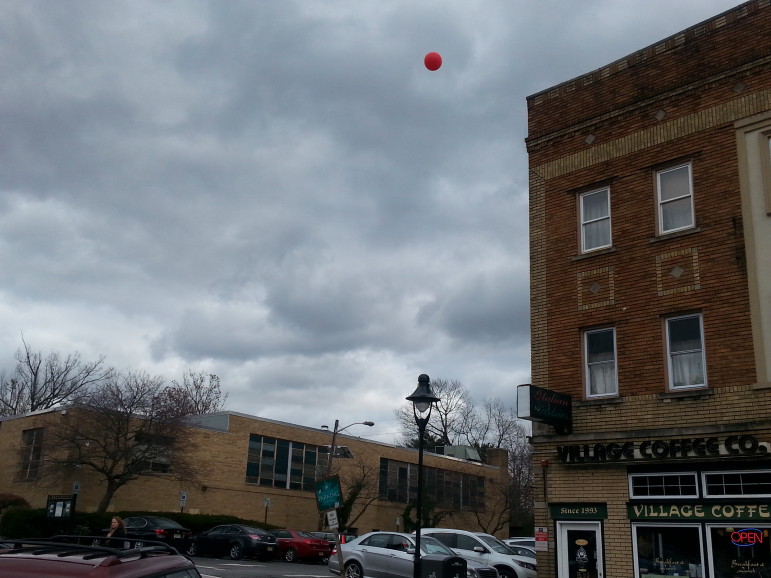 Meanwhile, a local grassroots group calling themselves the OhNo60 Project has been hanging red balloons at various vantage points around the Village, to provide a visual image for the general public to “assess the scale and massing of the building proposed for the Post Office site…”

OhNo60 members will continue placing balloons in positions that match the shape of the proposed building, according to its website. Also, supporters of the project have been flying red balloons in front of their homes.

To see more photos of the red balloons, or to get more information on the project, visit the website — or view them in person in the Village.