Update, 11/4, 10:15 p.m.: This article has been updated with comments from DeLuca and Larrier, and with updated election results.

DeLuca and Larrier, both Democrats, ran on separate tickets. The other candidates on the ballot were Kurt Kiley (Independent) and Angel “Bob” Perez (Republican).

DeLuca has served as Mayor for nine years.

Democratic Committee Chairman Ian Grodman said it was a “really good turnout all over Maplewood for an off-year election.”

“I’m very happy, and I want to thank the voters of Maplewood for believing in me for another three years,” said DeLuca, at a victory celebration at O’Reilly’s Pub. “It’s very humbling…I’m really excited about [continuing] to work with everyone to do what we want to do.”

Larrier said she was “humbled and thankful” to be able to continue to serve the community. “That’s all I ever wanted to do – to serve,” she said. “I look forward to another three years of giving my best for Maplewood.”

“I may not have won the election, but I have been rewarded for having ran,” said Kiley in an email. “The campaign has helped me grow as a person, and I have gotten to know and befriend many incredible people whom I otherwise would never have met.”

We should all thank the candidates, Bob, Vic and India for giving of themselves and campaigning for what they believe is best for Maplewood. Congratulations go out to Vic and India, who I believe will continue to work their hardest for our beloved town.”

“I extend my sincere congratulations to India and Victor on their re-election,” said Perez in an email. “I wish them and the entire Township Committee every success in working for Maplewood and all of us. If I can be of service in any way I would be delighted to assist.”

Larrier chose to run separately from DeLuca, her former running mate, because she disagreed with his beliefs on marriage equality. 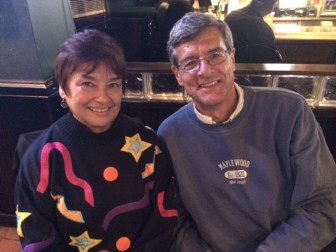 Vic DeLuca with wife Janey after winning reelection to the Maplewood Township Committee.