The Gateway Opens in South Orange; Residents Begin to Move in

10/2, 8:30 p.m.: The article has been updated to reflect that D&I Fitness is opening a second location at The Gateway and will keep their current location as D&I Kids. 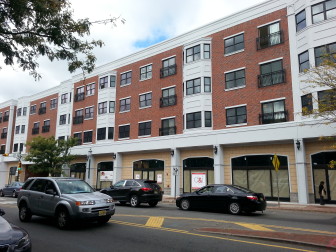 The first wave of tenants have begun to move in to The Gateway, the luxury residential and retail development at 9 W. South Orange Avenue in the middle of South Orange Village, according to Ed Ayuso, principal of EEA Industries, LLC, the developer.

“We are forty-five percent leased,” Ayuso said. “All nine of the one-bedroom apartments are filled, and the two-bedrooms are starting to go as well.” Ayuso said he expects to be fully leased by the end of October, which is when he and Village officials plan to host a ribbon cutting.

“It’s the best building in town,” said Ayuso as he led The Village Green on a tour Thursday afternoon.

The four-floor building, which has 9 one-bedroom and 48 two-bedroom apartments and 9,100 square feet of retail space, broke ground in May of 2013. It was previously the site of the Beifus car dealership, and the land sat vacant for nearly a decade.

The one-bedroom, one-bath units begin at $2,500 and the two-bedroom, two-bath units — of which there are three different floor plans — start at $3,500. Apartments feature walk-out balconies in most units and fireplaces in some, washer-dryers, walk-in closets, radiant heat floors in bathrooms, double-insulated windows, and “smart technology” including keyless smart home entry and heat and central air that can be controlled remotely from smart phones. 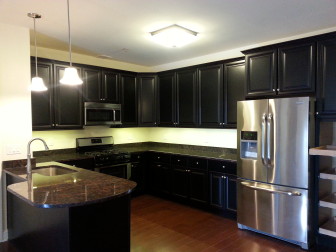 A kitchen in a 2-bedroom apartment at the Gateway

Building amenities include a fitness room, and an amenities lounge which will include a billiards table, oversized ovens and refrigerators for catering events, a fireplace and a large terrace, said Ayuso. There will also be a nearly 750-square-foot outdoor roof deck.

Each unit is allotted one parking space in the gated lot, which also features electric car chargers.

Mara’s Cafe and Bakery and D&I Fitness, the two major retail tenants, should be open by Thanksgiving, Ayuso said. Ayuso is currently seeking another retailer for the remaining 2,000 square feet.

D&I is opening a second location at The Gateway which will offer teen fitness, speed and agility training, sports performance training, group and private training. The gym will be equipped with state-of-the-art exercise equipment including a turf track and a Muay Thai kickboxing ring, said owners Delon and Terri Nelson. The gym’s current location around the corner on Scotland Road will become D&I Kids.

Some D&I clients are excited about another location just steps away from the train station, so they can park at the station and then work out. “All they have to do is shower and ‘All aboard!'” said Delon.

Enjoy our photo gallery of The Gateway.