As South Orange and Maplewood look to the Livingston Animal Shelter for potential animal sheltering services, some local animal advocates have expressed concerns about the condition of the shelter, located on Naylon Avenue in Livingston.

In response, the mayor of Livingston and the Livingston police captain who runs the shelter say they are glad to have the issues brought to their attention and that they will address them. 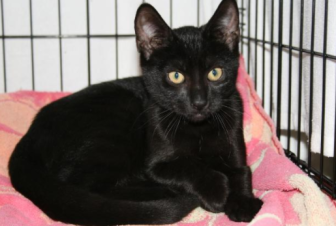 Squibbles is a 7-month old boy living at the Livingston Animal Shelter “who loves to cuddle, nuzzle in your neck and be held. He is a lap cat and just loves to be loved. He is very playful and looking to be held by his future owner.” For more information, email LivingstonShelter@gmail.com.

South Orange Village President Sheena Collum announced at the December 12, 2016 Board of Trustees meeting that the Township was negotiating with Livingston for potential animal shelter services and hoped to package that deal with Maplewood. Collum said that she also hoped that Maplewood would share the cost and use of the South Orange Animal Control Officer (Maplewood currently does not have an ACO and outsources that service to St. Hubert’s in Madison).

The announcement was made after a decision to award a 5-year lease for the former Jersey Animal Coalition shelter at 298 Walton Avenue in South Orange to Run Jump Lift, a local, minority-owned fitness business. Collum noted that none of the four bidders for the lease proposed using the space as an animal shelter.

However, many animal advocates in Maplewood and South Orange supported the bid by People for Animals, which proposed using the space as a spay/neuter clinic, and which had agreed to provide seven-day holding for impounded dogs to help the Township meet its fiduciary duty. Animal advocates noted that the building had been constructed for the expressed purpose of sheltering animals.

Although Run Jump Lift clearly had the majority of support from near neighbors and attendees at a December 1 forum on the topic as well as at the December 12 hearing on the disposition of the lease, animal advocates were distressed at the decision. One advocate, Claire Roberts of Maplewood, made a trip to the Livingston Animal Shelter where she observed conditions and presented her informal report to the Maplewood Township Committee at its December 20 meeting.

Roberts told the Township Committee that she felt the Livingston shelter was unsuitable for a number of reasons, including not properly labeling food, improper ventilation, a broken window, the positioning of animal cages, the lack of a separate room to quarantine unhealthy animals, and the site’s proximity to a sewage treatment plant, among others. (Roberts posted her full report/comments on the Facebook Public Group SOMA for Animals.)

“I’m glad that these issues were brought to my attention,” said Livingston Mayor Al Anthony in a recent phone conversation with Village Green. Anthony said that he and Police Capt. Gary Marshuetz, who runs the shelter, will be addressing the concerns concerns raised by Roberts.

The two men also defended the operation, noting that they had never put down a healthy animal within the last 12 years, and that the shelter has a very enthusiastic and involved volunteer committee that helps adopt out animals successfully.

As to why there is no separate area for unhealthy animals at the shelter, Marshuetz replied, “Sick and contagious animals are brought to the vet,” negating the need for an “isolation area.” (The veterinarian used by Livingston is Dr. Steven Weiner.) Marshuetz said the same protocol applies to any suspected rabid animals.

Marshuetz said that issues such as labeling food and cleaning bowls can be easily addressed.

Regarding the Water Pollution Control Facility, Anthony noted that the shelter is in an industrial area with several other businesses. Employees in the area and shelter volunteers — as well as animals — have been co-existing in the area for decades with no ill affects. Anthony also noted that their are residences about 1,000 ft from the facility.

Marshuetz also said that the facility, which has been used as an animal shelter by Livingston Township for 28 years, is about to undergo a number of planned improvements. The boarded-up window that Roberts observed, in fact, is about to become a door.

Anthony and Marshuetz said that they were in possession of Roberts’ full comments and that they looked forward to working with animal advocates and town leadership in Maplewood and South Orange to address all concerns.

In a separate exchange with South Orange Village President Sheena Collum, Collum  said she wanted to point out that:

1)  An animal shelter did not respond to South Orange’s Request for Proposals for the former JAC space at 298 Walton Avenue.
2)  People for Animals proposed using the building rent free in exchange for providing a 7-day hold for both South Orange and Maplewood.
3)  In the past four years, South Orange has averaged roughly one dog a month (between 12-18 per year) that would need to be held, with most dogs being returned to their owner. The situation is similar in Maplewood which averages between 17-24 dogs a year (1.77 per month). (The town’s TNVR program for feral cats has reduced the number of cats needing sheltering to virtually zero.)
4)  South Orange’s options are limited with respect to finding a 7-day hold because the Township has a full time Animal Control Officer. Maplewood’s agreement with St. Hubert’s in Madison includes certain Animal Control Officer (ACO) services.
5)  The low numbers of animals needing shelter from South Orange, Maplewood and Livingston make a regional operation appealing from a needs and financial standpoint.

Regarding the Livingston Animal Shelter, Collum told Village Green, “It is my hope that the governing bodies from the three towns can effectively coordinate with staff and volunteers in providing humane and quality services. All three towns have TNVR ordinances in place now which is a positive and has contributed to such low numbers of animals needing assistance. In speaking with the Mayor of Livingston Al Anthony, I know I can speak for both of us that we’d like to bring all parties together to address concerns and pool collective resources to make this agreement work.”

Village Green reached out to Maplewood Mayor Vic DeLuca after South Orange made the award of the 298 Walton lease to Run Jump Lift but before Roberts made her comments to the Township Committee. On December 14, DeLuca gave this reply: “Now that the [lease] decision has been made, we will begin discussions with South Orange about sharing animal control services. Our interest is ensuring that a shared services is equal to or better than our current service agreement with St. Hubert’s. Our negotiating team of Township Committeewoman India Larrier, Administrator Joseph Manning, Health Officer Robert Roe and Attorney Roger Desiderio will be meeting with their South Orange counterparts to start these discussions.”