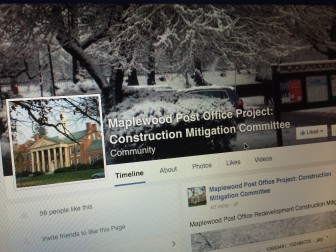 It’s all the creation of the Post Office Project Construction Mitigation Committee, which will be updating the pages and social media. Director of Community Development Annette DePalma, who is directing the committee, filled Village Green in on plans for construction mitigation outreach in an article in January.

DePalma noted that the Post Office Project Construction Mitigation Committee would work to overcome the challenges of rebuilding on a site located in the middle of a heavily used retail corridor — ensuring that the project causes as little disruption to residents, shoppers and merchants as possible.

The Committee, comprised of members of the Maplewood Police and Fire Departments and Dept. of Public Works, merchants (including John Meade of St. James’s Gate, Fred Shandler of Arturo’s and Michele Bessey of Perch Home), and residents, will seek to maintain pedestrian and traffic circulation and parking during demolition and construction.

“The goal is the have remediation and demo begin during an inactive period for the Village,” said DePalma. “We want to ensure that pedestrian and vehicular circulation remains fluid.” The committee will work with the Maplewood Village Alliance and perhaps with a retail consultant to ensure that shoppers and diners continue to come into town during the process.

DePalma said that demolition would begin this month, followed by installation of the building’s footings, which together should take 6-8 weeks. She said that the developer hopes to have the first floor retail completed by November 2016.

Read more of our interview with DePalma here.