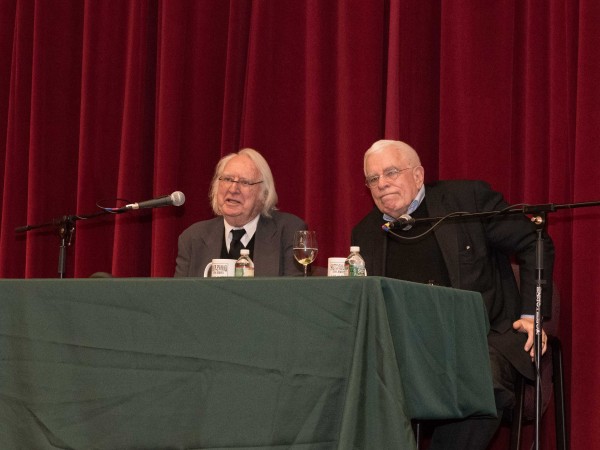 The design process for the “Post House” — a 20-unit apartment building with ground-floor retail to be constructed at the site of the former Maplewood Post Office — took an interesting turn today.

“There was a good exchange of information and ideas among Mr. Meier and Mr. Forgione,” continued DeLuca. “Mr. Meier told me prior to the meeting that he was glad to hear that the developer and his architect were working cooperatively with a team of local architects on the Design Review Committee. He felt having that type of community input was important. He restated that today.”

Village Green has reached out to Meier for comment; however, Meier’s office reports that he has left for a family vacation. We will post Meier’s comments when he is able to respond.

“We agreed that any future comments by Mr. Meier about the proposed project will come from him,” said DeLuca.

Meier recently made local headlines when he and architect Peter Eisenman — both men are Columbia High School alumni — spoke about the proposed Post House project in a discussion at the Maplewood Ideas Festival in March.

Meier and Eisenman both spoke in favor of adaptive reuse and warned about the possible loss of local character with larger scale projects. Meier was quoted as saying, “…what is proposed here, in terms of tearing down the Post Office building for instance, well, I think that’s a shame…the building has a life to it…I think someone should come along to make use of that building and keep it where it is.”

Meier later corresponded with local resident Lara Tomlin, who reported to the Maplewood Township Committee on April 7 that she had reached out to Meier via email and he had responded, “I’d be happy to design something for the site,” and asked Tomlin to put him in touch with JMF.

As a result of Tomlin’s public comment, the Maplewood Township Committee passed a motion authorizing DeLuca to reach out to the architect. DeLuca did and found that Meier was interested in offering one hour of his time to discussing the project with the developer. That meeting happened today.

“I think the four of us were very appreciative of the time Mr. Meier gave us to discuss this project in his hometown,” said DeLuca.

Despite a three-year public planning and approval process, the project has attracted opposition from some local residents, most recently from the newly formed Village Keepers Inc.

The Maplewood Township Committee voted unanimously on April 7 to designate JMF Properties as the official developer for the Post Office site, and voted 3-2 to grant JMF a 5-year tax abatement. The project is currently under design review by the Maplewood Village Alliance’s Post Office Design Review Subcommittee, which will make its recommendation to the full MVA board on May 6. The site plan and design should then move to the Maplewood Planning Board for review on May 13.