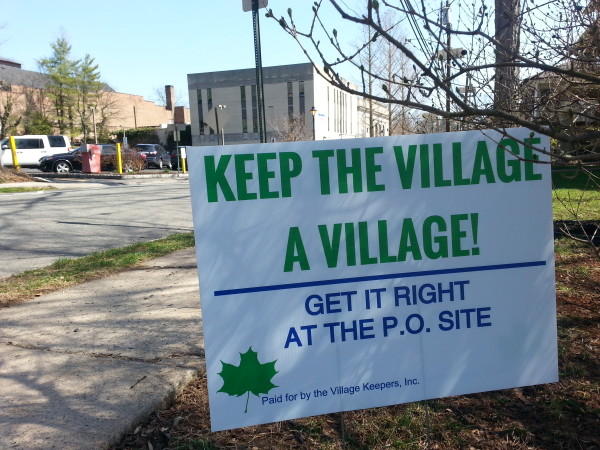 As the process to create a redevelopment plan and select a developer for the Maplewood Post Office site redevelopment stretches into its fourth year, opponents of the proposed JMF Properties mixed-use building in Maplewood Village have formed a non-profit organization called Village Keepers to fight the project.

Maplewood Mayor Vic DeLuca insists that residents can still help shape the project, although he disagrees with the vision of the Village Keepers.

The proposed project, comprised of ground-floor commercial space and two upper floors of 20 rental apartments, plus a partially visible subfloor and parking, will reach 45’6″ at its greatest height. Unlike the present post office building, it offers circulation around the building since it would not back up all the way to the New Jersey Transit train tracks.

Opponents have raised various concerns including the scale of the building, its design, the financial incentives granted by the Township, and the failure to reuse the existing building. Asked what aspects of the project Village Keepers opposed, Chair Dirk Olin responded, “In essence, it’s about all of the above. Village Keepers is about promoting the welfare of the Village through a balance of development and preservation, progressive planning, responsible ratables, and the most practical widespread stakeholder engagement that we can fund.”

Olin, a former member of the Maplewood Environmental Advisory Committee and the Open Space Trust Fund, continued, “It [the project] fails on financial, environmental, aesthetic and communitarian grounds. It’s really quite sad.”

“There is no disagreement with the Village Keepers that we all want to do right on the post office site,” said DeLuca in an email. “It’s just that we have a different vision for the future. The Keepers want to keep things in place, which really does not address the marketing realities of the 21st Century. I favor new retail spaces with community spaces for outdoor eating, sitting and other activities. I favor more residential units next to the train station, an environmentally sustainable type of development. I favor opening up the Village parking lots and connecting the south and north side of the Village. Keeping the current building does not do this. It literally divides the Village and harms our goal of connecting the Village and Memorial Park.”

Village Keepers joins at least two existing efforts opposed to the proposed development. However, those groups — OhNo60 and Engage Mapelwood — are “concerned citizens with a mailing list,” said former Maplewood Mayor Fred Profeta, who is acting as advisor to Village Keepers, whereas, “Village Keepers is a legal entity.” The organization is soliciting contributions to cover expenses, which include lawn signs that read “Keep the Village a Village. Get It Right at the P.O. Site.” Profeta reports that 200 signs “went up in two days” and that another order for signs is currently being placed.

Olin said the group is in favor of exploring adaptive reuse and “completely understands people who don’t like the look of the project,” which he called “generic” and “hulking.” In addition, he said, “You have to ask yourself, for a prime piece of real estate in Maplewood Village, why a tax break?”

Olin also contended that proponents never asked for a proposal on adaptive redesign. Finally, “…why in a town that is crying out for more recreation and educational resources, [does the town] makes this decision that would privatize public property.”

Olin and Profeta said that the Village Keepers is currently forming a board of trustees and creating a website.

Meanwhile some questions have been raised about organized efforts to combat the JMF project.

While Profeta calls accusations that OhNo60 has spread misinformation about details of the project “inevitable and unfounded,” he also noted, “That’s one of the reasons Village Keepers came into being — getting information out in a good and consistent way and having a decision-making process.”

Regarding questions that Village Keepers could be a front for funneling money to Greg Lembrich’s campaign for TC (Profeta is co-chair of the campaign with former Committeeman David Huemer), Olin said, “That is categorically untrue. On the street that would be called a lie. In a court of law, I believe the term of art would be slander. I hope that whoever said that would not be foolish enough to attach their names to it.”

Olin added, “As a private citizen I support Greg’s candidacy, but these are two separate issues. Our goals are our goals, whether or not Greg is on the TC.” He also noted that “as a nonprofit, our finances are going to be completely public and transparent.”

Olin also said, “I feel very strongly about not making this personal. I have worked on each of Jerry Ryan’s campaigns and he is an honorable person. But I disagree with this decision.” (Ryan voted to designate JMF as developer and approve a 5-year tax abatement for the development; Lembrich is running against Ryan and Nancy Adams for one of two seats in the Democratic primary for Township Committee.)

Olin said that he felt that the more than three years of public meetings leading up to the current project were not valid. “I feel like all of those inputs were categorically ignored and the folks who brought you the Station House were installed and fast tracked.”

But with the JMF Properties project already approved by the Township Committee, what can be done to stop the development?

Profeta notes that the PILOT for the project was approved by a narrow 3-2 vote. “If one person has a change of heart the financial agreement can be undone. I think it is going to be quite clear to the Township Committee that this is not an idea that is popular in Maplewood, and certainly now with the insertion of Richard Meier … and his willingness to do the design, it’s time for a second look.”

(Meier, a Maplewood native and world-famous architect recently weighed in on development in the Village and wrote in an email to a resident that he would be interested in designing the site but did not specify at what cost. The Township Committee passed a motion to have DeLuca approach Meier about consult with the developer).

Profeta also feels that the project will have a difficult time gaining Planning Board approval: “There are a lot of things that would have to be approved…that I’m not sure that the developer is going to be able to meet with regard to parking, etc.”

Profeta referred to a 1999 ordinance that states that no building in Maplewood Village shall be demolished unless the owner shows significant financial hardship. Profeta, who is on the board of the Maplewood Village Alliance, said he made a motion at the last MVA meeting that the Alliance should require the town to show financial hardship to justify demolition, or to explain why they don’t have to; the motion did not pass.

Profeta expects that another “interested party”  — perhaps Village Keepers — will appeal to the Planning Board based on that ordinance.

With regard to the question of transparency, DeLuca wrote, “This has been a transparent process for more than three years. More community and public meetings have been held for this project than any other recent development in town. I wish the leaders of the Village Keepers were more engaged earlier but they weren’t. I don’t remember seeing Mr. Olin at any of those many meetings. And when Mr. Profeta was on the Township Committee he voted for every decision that has gotten us to this point – rehabilitation designation, consultant hiring, Master Plan approval. He voted for all of it before he opposed it.”

“I understand change is difficult,” added DeLuca, “but this has been a very deliberate and open process. In fact, one floor of the proposed building was eliminated due to community input. I heard what people were concerned about and the Township Committee acted to make a change in the building’s height. There are still opportunities to shape this development as we go through the Planning Board process. The Village Keepers and anyone else are invited to offer constructive suggestions so we get it right.”

Olin, who had told The Village Green that he felt that the developer’s retraction of one floor was merely a “negotiating tactic,” said that he knew that the formation of Village Keepers was happening “late in the process, but you don’t want to get this wrong. You can’t undo this decision. A bad decision that takes a long time is still a bad decision.”