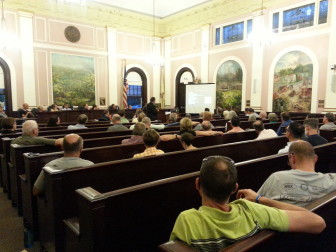 Editor’s note, 7/24, 4:10 p.m.: this article has been updated to include a comment from a representative of the group “Village Facts.”

After a nearly six-hour meeting that stretched into Thursday morning and saw passionate rhetoric from both supporters and opponents of the proposed redevelopment of the former Post Office site, the Maplewood Village Alliance (MVA) board of directors approved the developer’s most recent site plan.

The motion to approve the plan – which included several alterations and conditions the board stipulated to the developer — passed with 8 in favor, none opposed and 2 abstentions. (Two members recused themselves before the proceedings because of reported conflicts of interest.)

The plan now moves to the Maplewood Planning Board for a full hearing.

The MVA meeting was conducted as a legal hearing, with a court reporter present to swear in witnesses and record the proceedings, and attorneys for various parties there to advise their clients.

Jonathan Drill, the  Maplewood Village Alliance attorney, said that because Maplewood Redevelopers had filed a new application after changing the original plan to accommodate Kings’ delivery trucks, the site plan being reviewed was being treated as entirely new.

Also, “out of an abundance of caution” related to the lawsuit brought and recently dropped by Village Keepers Inc. against the township, the MVA and the developer, the MVA also decided to rule on whether the property’s owner (currently still the township) had to prove “significant financial hardship” to be permitted to demolish the building, said Drill.

Suggesting that the MVA has to review the site plan in the same way the township’s Planning Board does is a “misreading” of the redevelopment plan, Drill said. “You’re not the planning board,” he said to the board members.

Asked whether they would appeal the decision, Village Keepers’ Director Dirk Olin said in an email Thursday that the MVA used a “narrow consideration of design” that “ignored both logic and law.” However, he said his organization was “confident that the Planning Board will see the plain meaning of policymaking with clarity [and apply] the December 2014 reaffirmation by the township committee—the most recent pronouncement by that body—that any owner proposing demolition must demonstrate financial hardship as compared with adaptive reuse or other alternatives.”

In a response to Profeta’s comment, Paul Surovell of Village Facts, a recently formed group that says its mission is to “provide verified information about the post office project,” said, “[We support] the redevelopment process and we are gratified that it was allowed to play out at the MVA meeting in a wholly democratic and inclusive fashion, and that there was a balance among the various perspectives on the project.”

Calling himself “disappointed” with Profeta’s comment, Surovell continued, “At the moment that the Maplewood Village Alliance went the extra mile to allow the community to provide input into the process and even went beyond what is required by law, it’s rather shocking that Fred would strike such a sharp note of discord. I am especially shocked, given Fred’s recent private and public offers to seek common ground on the Post Office matter.”

Presentations at the meeting were made by the architect, David Minno; structural engineer John Westenberger and civil engineer Eric Keller. Members of the public and the MVA board were able to ask questions and make statements.

The biggest change in the new site plan is the accommodations made to allow Kings to continue to back its delivery trucks into the driveway next to the former Post Office. To do so, Minno moved the building back 8 feet, widened the driveway and relocated part of a pedestrian plaza to the eastern side of Ricalton Square. 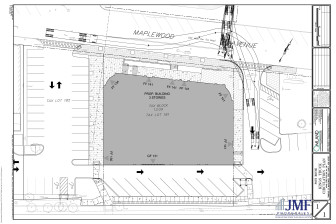 Several residents and board members questioned the sidewalk, saying it was awkward and unattractive. “Why wasn’t the front [of the building] designed in a more urban way?” asked Christian Uhl, an architect. Minno said it was a function of the slope of the site, and also to accommodate the 21 underground parking spaces for tenants.

“If you reduce the parking you can change” the staircase design, said Tim Fryatt, an architect. Keller, the civil engineer, said the “grade change creates issues” and said the addition of the retaining wall and plantings would create “a special area in front.”

Other questioners asked about the size and design of the windows on the upper, residential floors, as well as whether they would be soundproofed (Minno said they would).

Resident John Harvey challenged the developer about the requirement for including 1,500 square feet of public space in the design. JMF counsel Andy Norin said the sidewalks and plazas satisfy the requirement.

Minno commended the MVA, saying they “really helped shape this building” and improved it with their comments and suggestions. Noting the building has an “art deco style” that will blend seamlessly into the Village, he said the structure has been thoughtfully designed from all sides.

“There’s not a cheap side or a back to the building,” Minno said. 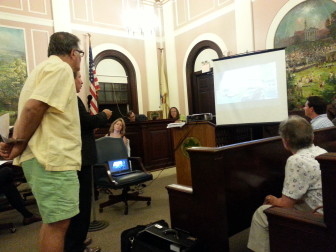 Regarding adaptive reuse, Norin said it was “not feasible to reuse the existing Post Office building.”

The structural engineer said the current columns and bearing walls could not support additional floors, and the roof would need to be completely rebuilt. “It would be a difficult task to repurpose the existing structure,” he said.

Harvey asked Minno if he considered alternative designs to prove the building could not be repurposed. “No,” said Minno. Noting that the engineering study did not include an inspection of the building’s roof, Inda Sechzer asked if Minno referred to existing blueprints. Minno said he had not.

Township Administrator Joseph Manning testified that the township has been seeking a better use for the Post Office property for a decade; that the vacant building currently generates no revenue but costs the town more than $2,000 a month in maintenance; and that the anticipated revenue from the sale would contribute represent 2.4% of the town’s annual budget.

Mayor Vic DeLuca asked Manning about the township’s purchase of the former Woman’s Club, which it bought for $1.1 million dollars and has turned into a cultural and event space. DeLuca noted that the town had been repurposing the old building.

Harvey asked Manning how much the town estimated it would need to completely restore the building (around $1 million) and how much income it generated annually ($56,000).

Although the questions were sometimes contentious, when it came to the public statement period the speakers were split down the middle.

Some of those in favor said the current site was a “dead zone” and the new building would add vitality and create an economic boost to the Village. “The size, scale and use are totally appropriate,” said Fryatt.

Detractors questioned if this was the best use for the site. One woman said the issue had so “polarized” the community that the town had “lost sight of what is right.”

MVA Board President John James agreed that the debate had hurt “the Village merchants and morale.” He said while many small compromises were made in the process and the resulting design is  “not my favorite building,” the project will give a boost to Village businesses and raise the overall level of infrastructure in the downtown.

The strongest part of the plan “by far,” said James, is how it improves the connection between the two sides of town – a goal of the MVA for 18 years.

Board member Joe DePlasco said he had come to the meeting expecting to vote against the plan (as he had previously), but changed his mind after hearing the testimony.

Minno said this was one of the most complete reviews he’s ever worked on. “I have a lot of admiration for how the town has been served” by the MVA and the other boards. It has been “long and arduous” but the outcome will be good.

“This is one of the greatest sites I’ve seen in New Jersey,” said Minno.