New Vision for Irvington Avenue to Include ‘Maplewood Corners’ 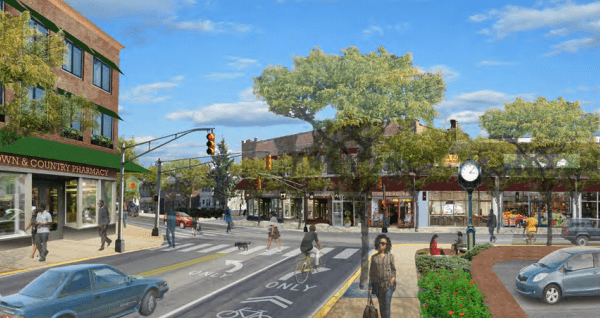 Together North Jersey’s vision for Maplewood Corners at Parker and Irvington Avenue.

Irvington Avenue has been getting a lot of attention lately.

Simultaneously, Maplewood has also been working hard on Irvington Avenue and its efforts are about to bear fruit.

Recently, Together North Jersey released the results of a study of the corridor across three municipalities: Maplewood, South Orange and Newark. Annette DePalma, Maplewood’s Director of Community Relations, wrote the grant which brought architectural, engineering, retail, and other consultants to study the entire corridor.

The resulting plan includes turning the currently car-oriented corridor into one that embraces “all modes of transportation” — including creating a bike route that connects the corridor and the various municipalities — improving public spaces and encouraging infill development (read the grant synopsis and see the full report below).

DePalma explained that the Township has wanted to do something significant with Irvington Avenue for some time “because is one of the gateways to Maplewood, is one of the three major shopping districts in our community, but it has the most challenges, among them being that it is a County Road, and the streetscape is not particularly inviting.”

South Orange and Newark came in as project partners.

“As we brought in consultants, it became clear that what made sense was to look at the entirety of the mixed use corridor, while still understanding that each municipal portion has distinct characteristics,” said DePalma.

“One interesting thing we discovered about the Maplewood’s portion is that it is such a well-functioning business district which people walk to.” DePalma noted that the area is fully occupied — boasting the independent drug store Town and Country, a day care center, a supermarket, QuickChek, a barbership, and more.

“It’s a very interesting and vibrant neighborhood but it has challenges, both real and perceived. and we want to try to create a sense of place that is inviting, that people feel comfortable in.”

Toward that end, the working group was able to leverage the Together North Jersey grant into other funding applications. Using Together North Jersey’s plan, DePalma urged Essex County to apply for a Transportation Alternative Program (TAP) grant to do hardscape renovations along the entire corridor from South Orange to Newark, ending in Maplewood. The grant application seeks funding for streetscape improvements including sidewalk renovations, street furniture, new lighting, better crosswalk delineation and other measures to enhance the corridor from both a safety and aesthetic perspective.

“If we get the grant, we we will be working more closely with merchants and residents and working on overall upgrades in the neighborhood,” said DePalma.

“The goal is to make it a more cohesive and pedestrian friendly and safe shopping destination.”

To find out more about the study, read Maplewood Township’s press release below. Or view the attached pdf of the final Together North Jersey report.

Together North Jersey has announced the release of the Irvington Avenue Corridor project final report. The Local Demonstration Project report provides a set of strategies to better connect areas of South Orange, Newark, Maplewood and Irvington located along Irvington Avenue.

The county roads that connect the communities of North Jersey are one of the defining characteristics of the region’s landscape. Irvington Avenue, which winds through South Orange, Newark, Maplewood and Irvington, is one such example.  The Irvington Avenue: Creating a Complete Corridor plan re-envisions this important car-oriented corridor as a Complete Street that accommodates all modes of transportation and boasts vibrant public spaces that enable new development. The project also seeks to establish the corridor’s eastern end as a new regional destination, “Maplewood Corners.”

The Irvington Avenue Corridor, though only one and a half miles long, is made up of several distinct sections, each with its own characteristics and ongoing planning initiatives. In South Orange, Irvington Avenue is an important, but underutilized link between communities. Here, the road has the potential to become a mixed-use street connecting the emerging college neighborhood around Seton Hall University with the downtown. In Newark, the Ivy Hill shopping center is undergoing renovations on the side facing the avenue to improve its appearance and access for pedestrians. In Maplewood, the Township has prioritized the Clinton Avenue crossroads, an under-performing cluster of neighborhood shops, as an area for revitalization.

A central feature of the plan is to develop a corridor-long bike route within the avenue’s existing-right-of way. This has the potential to better unite the communities. It will also increase potential for transit-oriented development by allowing people to come from greater distances to the South Orange Train Station without relying on a car.  On the eastern end of the Irvington Avenue Corridor, the plan proposes a strategy for how to transform “Maplewood Corners” into a place locals, as well as the broader community, will want to visit and stay. This strategy is focused on:

“The Irvington Avenue Corridor plan is an extremely useful resource that will inform the future development of the corridor,” said Maplewood Municipal Prosecutor Annette DePalma. “Enhancing pedestrian safety, improving public spaces, and making roads accessible for all modes of transportation, will both attract new opportunities for development and support ongoing revitalization efforts. It will be exciting to implement visible changes across all the communities involved.”

One of the most important project outcomes is that South Orange, Maplewood and Newark have created an Irvington Avenue Corridor Working Group to improve mobility and way-finding (i.e. improved signage and other means of directing people to commercial areas and other amenities). The group took its first step forward with a joint grant application with Essex County to the FHWA’s Transportation Alternatives Program (TAP) for implementation of the Irvington Avenue Complete Street Plan.

The project is one of 18 Local Demonstration Projects (LDPs) undertaken by Together North Jersey. Conducted from February to June 2014, the Plan was completed by a steering committee comprised of Maplewood Township, the Township of South Orange Village, the City of Newark, Essex County, Maplewood Chamber of Commerce, NJ TRANSIT, and local businesses and organizations Adassa Day Care, Diamond Gym, Garden Academy, and the Unified Vailsburg Services Organization. The Project Team, led by Perkins Eastman Architects, included Larisa Ortiz Associates and Fitzgerald & Halliday.