This story was updated on July 29, 2015 with a statement from developers Josh Mann and David Kasdan. It has also been updated to show that the final proposal was for 49 apartment rental units, not 72 units. 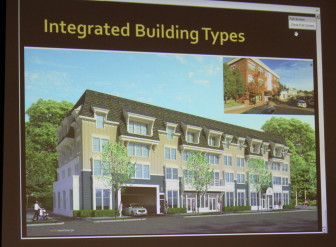 Village President Sheena Collum announced at the South Orange Village Board of Trustees meeting on Monday night that a proposal to build an apartment building on Irvington Avenue is no more.

South Orange natives and residents Dave Kasdan and Josh Mann presented a proposal for a 72-unit rental apartment building to be located at 270-282 Irvington Avenue to a feisty crowd at an informal meeting hosted by the Seton Village Committee in March.

At that time, neighbors of the proposed development expressed concerns about the size of the project (50-57′ tall) and its density (72 units with 1.2 parking spaces per unit on a slightly less than 1.4 acre lot), its potential impact on the school district, whether or not it would attract Seton Hall students as tenants, drainage, parking, traffic and screening for nearby single family residences — among other concerns.

By late March, about two dozen residents had organized “Seton Village Residents for Positive Change” in opposition to the size of the project. Group member Catherine Cronin said that the group felt that 20 units or three stories would be more appropriate for the site. At the informal March meeting, Mann explained that the density of the project was necessary to make it financially viable. Mann and Kasdan also would have needed approval to rezone the parcels as multifamily in order to move forward with the project.

Mann and Kasdan report that, since March, the size of the proposed development had substantially decreased throughout negotiations with the town (see their statement below). Their final proposal was for a 49-unit building at 37′ in height and three stories. Mann and Kasdan report, however, that the Village leadership has informed them that the “Board of Trustees would only consider redevelopment proposals with a unit count of 35 units or fewer.”

Collum said that she and Trustee Mark Rosner, who is Chair of Planning and Zoning, and Village Administrator Barry Lewis had been meeting with developers Mann and Kasdan but could not reach agreement. Collum commended the developers, who she said “put their best foot forward” and clearly wanted “to be a part of revitalization of the corridor.” However, said Collum, “Unfortunately, we could not end up in a place that would be acceptable to move forward with even a conditional developer designation.”

“That project will not move forward,” said Collum, who did not offer specifics on what the sticking points were between the town and the developers.

During the Board of Trustees meeting, Collum was quick to add that South Orange would continue revitalization efforts on Irvington Avenue and promoted the next Food Truck & Craft Beer Festival which is slated for Friday, Oct. 2.

“We are obviously disappointed that the Village’s leadership did not agree with our vision for the site.  First and foremost, it is no longer accurate, and has not been accurate for some time, to call it a 72-unit development proposal.  We had revised our proposal significantly over the course of the last year, after feedback from both neighbors as well as the Village’s leadership. These proposals were presented directly to the Village’s leadership and outside consultants, and changed countless times after their feedback.  Our last proposal called for 49 units plus two retail spaces in a 3-story building that would have had a height, at 37 feet, below some of the single family houses on the adjoining streets. The design of the building and the utilization of high-end materials and finishes would have been maintained– even at this reduced density.  The amount of green space and screening we proposed around the building and parking lot, in addition to the natural buffers already in place, would have more than sufficiently shielded the view of the building from surrounding homes.  Additionally, we significantly increased the parking ratios based on neighborhood feedback.  Lastly, our design included significant ‘green’ features, which would have benefited the entire surrounding neighborhood as well.”

“We informed the Village President of our unwillingness to pay expensive extension payments to the current property owners and move forward with the project for a number of reasons. First, approximately one year after going under contract, a redevelopment study for the area remains unfinished without even a hearing or the releasing of a report. We were interested in the parcels and Irvington Avenue, not only because of our own and our community’s enthusiasm for positive change on Irvington Avenue, but also because of the enthusiasm showed for the redevelopment study by the Village’s leadership. Our suggested reduction of density from our original proposal, coupled with our desire to build a higher-end building and product, would have required the often misunderstood long-term PILOT only available in a ‘redevelopment area.’  The fact that no measurable progress has been made in the past year concerning a redevelopment study, with nothing on the agenda in the near future, did not give us the confidence required to invest any more dollars in the process. Even after our significant reduction in density, we were informed that the Board of Trustees would only consider redevelopment proposals with a unit count of 35 units or fewer. Those numbers just don’t make sense for a couple of reasons. There are high land costs. This is not unique to this part of South Orange, as land costs are high throughout northern New Jersey.  Additionally, we believe a project of 35 units would have required us to compromise significantly on the quality of external and internal finishes as well as our commitment to an environmentally responsible development. As residents of South Orange, with one of us living in the immediate neighborhood itself, that was not something we were willing to accept. Regardless, without the long-term PILOT, a project even at the size we proposed would be impossible financially.”

“As residents and neighbors, we share the Village President’s desire to see this corridor redeveloped and are hopeful that will happen. In fact, the idea for this project came about simply from walking this neighborhood with family, being a part of the community,  realizing the untapped potential for something great, and envisioning a thriving and exciting area with strong commerce and solid pedestrian traffic. It is undeniable that the Irvington Avenue commercial corridor is a grossly underperforming asset, and the Village President is to be commended for her focus there. However, we have serious doubts that any meaningful redevelopment will happen at the density envisioned by the Board of Trustees. This is especially true if there is not a redevelopment designation for the area and long-term PILOTs are, consequently, not available. Without a meaningful investment and project on the parcels we have under contract, we think it is unlikely that any of the other current building or property owners will make any significant investments. This is because, in spite of the positive activity taking place in the neighborhood, investment follows investment. There are no other parcels in the neighborhood, in our opinion, where a truly transformative redevelopment is feasible.  We hope that we are wrong, but unfortunately we fear that Irvington Avenue will look in 5 years very much like it looks right now.”

“This should not be taken as criticism—it is a respectful disagreement on what is appropriate for that site and all parties worked in good faith to find common ground. We are in agreement with 99% of the Village President’s vision for South Orange and believe she and the current team can lead us in the right direction. Unfortunately, the one area we strongly disagree on is the 1.38 acres of property we have under contract on Irvington Avenue.”