About two dozen residents of the Irvington Avenue corridor have organized to form a new group in response to a proposed 72-unit residential development in the newly branded “Seton Village” section of Irvington Avenue.

Local developers Dave Kasdan and Josh Mann presented a proposed rental apartment building development to be located at 270-282 Irvington Avenue to a feisty crowd at an informal meeting on March 11 at Congregation Beth El.

At that meeting, several audience members expressed concerns about the size of the project (50-57′ tall) and its density (72 units with 1.2 parking spaces per unit on a slightly less than 1.4 acre lot).

Mann and Kasdan, both natives of South Orange, said they were open to feedback but that the density of the project was necessary to make it financially viable.

Now, some residents have organized to form “Seton Village Residents for Positive Change.” Group member Catherine Cronin stresses that the newly formed organization is appreciative of the work of the Seton Village Committee to improve and beautify the area — in fact, many of them have volunteered for cleanup work and enjoyed events like the Food Truck & Craft Beer Fest. However, they say that the size of the proposed development is too big and that the Seton Village Committee isn’t “fairly representing our neighborhood sentiments in their communications about this proposed development.” 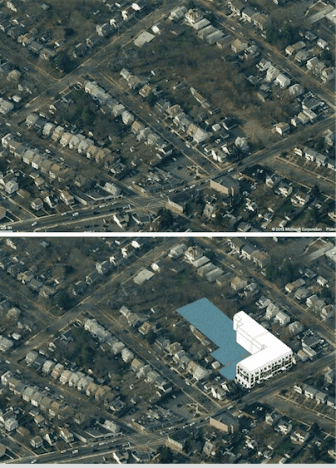 “We agree that 20 units would be more appropriate — or three stories,” said Cronin, who acknowledged that the current property owner has been less than helpful in improving the neighborhood. But, she noted, “Because it’s the first development [on Irvington Avenue], we really want to make sure the town gets it right.”

Group leaders say that the number of residents coming to SVRPC meetings is “25 and growing” and that they have built a neighborhood email list of more than 50 addresses. Soon, they will be leafletting other neighbors. In addition, they’ve created an email address to help them organize: [email protected]gmail.com.

In a separate email conversation, Cronin wrote that the mission of Seton Village Residents for Positive Change is “to advocate for safe, environmentally sound, and economically viable development in Seton Village that is responsive to the needs of residents and contextually appropriate to the density, architecture, and scale of the Seton Village community.”

To that end, SVRPC member and Irvington Avenue area resident Amy Fitzpatrick read a letter to the Board of Trustees on Monday night (see below) and local architect and resident Marc Ackerson also presented two handouts to the board (see above and below).

Doug Zacker, Chair of the Seton Village Committee, told The Village Green, in response to an email request, that he felt the protest was “premature.”

“Personally, I think it’s premature to just say no,” wrote Zacker. “The developers have already made major changes based on community feedback and I’d like to see the process continue, which will certainly include more changes, before passing absolute judgement.”

Zacker noted that the work of the Seton Village Committee was undertaken with the knowledge that “the positive change we have been facilitating would attract developers who could spur even bigger and more positive change. Now that it has, our goal is to ensure that everyone is aware of what’s going on and of the opportunities to voice their concerns about the project. We will even facilitate forums like we did a few weeks ago. At that forum these same concerns were raised and subsequently discussed with the developers. Of course, residents are entitled and encouraged to voice their opinions however they deem necessary.”

Developer Josh Mann said that he and Kasdan were willing and interested in meeting with residents any time and expressed disappointment that the group had not reached out to him. “It’s interesting,” said Mann. “We’ve made ourselves very available and asked people to contact us. The only people who have contacted us are the people who are very positive about the project.” He noted that “10 or 15 people were very vocal about concerns at the [March 11] meeting, but many people came up to us who were very positive after the meeting.”

Still, said Mann, he’s willing to hear any feedback: “We are early in the process. We are still developing our plan.”

“It’s worth repeating that we are doing this because we both want to see development on Irvington Avenue. Dave is a resident in that neighborhood. He brought this to me saying this is the kind of project that can really energize the neighborhood. The shape of the property and what we can do with it can really create a positive change in the corridor.” Mann added, “We’re local and were doing this because we want to do good. We think the Irvington Avenue corridor can be a really special place.”

Mann cautioned that the corridor “has not seen any real or significant investment in decades. Without real investment it is going to remain without investment for another couple of decades. The real affect on your property values is people seeing a beat-up commercial corridor more than seeing a brand new apartment building.”

Trustee Sheena Collum, who has put the SVRPC on the agenda for the Village’s April 2 Development Committee meeting, also said it was early in the process:

“Getting feedback from the community, such as hosting forums, is one of the central components of good planning and that needs to be done on the front end of any process, particularly when there are many stakeholders who need to be heard. With Marylawn a working group was created with residents, with Orange Lawn the feedback from the neighborhood is leading to changes, and with Irvington Avenue, the Village has an advisory board of residents and businesses from the neighborhood that share information and bring back recommendations.  At the end of the day, we as a Village make much better decisions with debate and participation and it’s wonderful to see people engaged.  Hopefully when we pull together the best of what everyone has to offer, our end result is more successful.  We’ve gotten a lot of things done in a short period of time including beautification, street paving, new events to the area, a new brand, and most recently a large grant for streetscape improvements.  What’s important is that people keep talking and working together.”

The letter from the Seton Village Residents for Positive Change that was read to the South Orange Board of Trustees on March 23, 2015:

We are residents in the vicinity of the proposed Seton Village high-density redevelopment. We came to the community forum with open minds and we support neighborhood-conscious, smart growth in Seton Village. We encourage each of you to consider the proposed development in light of its potential impact on the low-density residential character of our community.

Our goal is to raise important questions about whether the proposed high density development is appropriate in the scale and context of this neighborhood block. The developers proposed a 70+ unit, 4-story multi-family rental building on a 1.4 acre irregular lot.  The majority of the proposed 4-story (approx. 57 ft) structure would be located in the backyards of the W Fairview/Tichenor/Village block, directly behind our single-family residences. The proposed building and parking lot would strip the single-family identity from W Fairview, Tichenor, Village and other surrounding streets.

We are not downtown South Orange–we have our own distinct neighborhood and residential character. This proposal would be unprecedented in our residential neighborhood because no other high-density building is tightly surrounded on all sides by single-family homes.  It would set a dangerous precedent for new development in South Orange going forward and put pressure on our schools.

You may have received a summary of the recent community forum from the Seton Village Committee. It outlined useful information regarding next steps and ways to participate in the redevelopment planning process. However, there are still many serious questions and unaddressed concerns from the community about the impact of the proposed development. We hope that you join the discussion and we will keep you posted on any future meetings.

We encourage you to reach out to us directly to get involved and voice your input on this proposed large-scale development.