The Village of South Orange has gained access to the building formerly occupied by the Jersey Animal Coalition on Walton Road, according to Village Deputy Administrator Adam Loehner.

“On Thursday, November 13, still without keys from the JAC, the Village gained access to the facility. The JAC had moved all of their belongings out and we have begun to assess the condition and secure the building,” wrote Loehner via email to The Village Green on Saturday evening, November 15.

The JAC had agreed to close its doors permanently on November 11 and was to deliver the keys to the Village on that date per the agreement. However, on November 11, Loehner reported that the JAC refused to hand over keys to the shelter.

“The JAC is refusing to turn the keys over,” wrote Loehner via email on November 11. “We are again working with our lawyers to sort this out.”

The shelter had been closed since March after the township issued a quarantine for more than 50 health code violations. After a Superior Court judge ruled to temporarily lift the quarantine in early July, the town and the JAC reached a settlement in principle on August 20 in which the JAC agreed to vacate the premises and South Orange agreed to drop all complaints against the JAC.

When asked for comment about the refusal to hand over the keys, William Strazza, attorney for the JAC, emailed, “The dispute between South Orange and the JAC has been ongoing since March of this year. JAC filed suit against South Orange in July. The case remains active and ongoing. The JAC has been attempting to resolve all claims with South Orange amicably. Therefore, any public comment on the status of the case, the status of ongoing discussions related to amicable resolution, or the like, strike me as inappropriate.”

In October, JAC Executive Director Ruth Perlmutter reported that all animals were “out of the shelter and safe.” On Tuesday, Beth Platner, a volunteer with Mattie’s Friends, which has been helping place the remaining animals, told The Village Green, “We volunteers are still fostering and boarding the last four dogs and it has been very difficult on all of us, including the poor dogs.”

She continued, “…the dogs are really struggling since losing the only home they have known for years. They have been bounced around from foster home to foster home and are all suffering from anxiety. One Clyde, now has developed serious separation anxiety and is living in the Elizabeth Ann Kennel in Stirling. Mattie’s Friends is paying for boarding, training, and medical care for all of the dogs. We hope we do not run out of funds prior to their finding homes.”

Platner reported that Mattie’s Friends is looking to raise funds “after spending 1500.00 on medical for one dog so far, and another potential big bill for another.” Those interested in contributing can visit here.

Since the JAC was quarantined in March, the Village has contracted with Associated Humane Societies for “sheltering needs during these proceedings,” Loehner told The Village Green in October. “The Board of Trustees is looking into a variety of option for the future.” 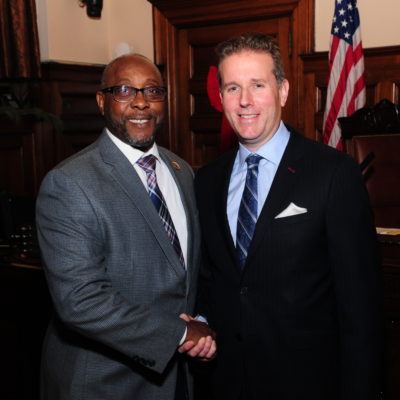