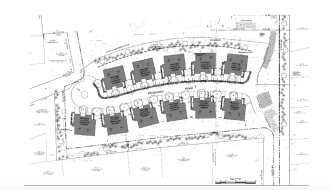 Editor’s note, 3/7/16: The article has been corrected to reflect that the ordinance as currently written would approve a redevelopment plan that would zone 11 acres of Orange Lawn Tennis Club for three possible uses: private recreational, single-family homes or townhouses.

The South Orange Board of Trustees voted Monday to introduce an ordinance approving a redevelopment plan to construct luxury townhouses on the property of Orange Lawn Tennis Club. It passed 5-0 with Deborah Davis Ford absent.

The ordinance and plan can be found on the township website.

The move clears the way for the developer to build 22 units in a luxury townhouse complex on five acres at the front of the club’s property. Township Administrator Barry Lewis explained that after lengthy discussion with the club’s owners, the developer and neighbors, as well as review by the Planning and Zoning Boards, the township believes the plan to be “a good transition from existing surrounding housing stock.”

The style of the townhouses would fit in with that of existing single family homes in the area, said Lewis, in terms of density and style.

Also importantly, the plan would change the zoning for the remaining 11 acres of the property, so that they could only be used in future for private recreation, single family homes or townhouses. Therefore if Orange Lawn ever closed or sold the property, a developer would be prohibited from building, for example, a high-density apartment complex, said Lewis. However, a developer could potentially construct another 48-49 townhome units, according to Lewis. 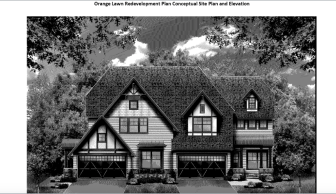 The site plan now moves to the Planning Board for review and then back to the Board of Trustees for adoption. After that, the developer still must file an application for site plan approval. Lewis said any neighbors located within 200 feet of the property would be notified by mail of the next public hearing at a BOT meeting and that members of the public also will have an opportunity to comment.

Village President Sheena Collum pointed out that since the town does not own the property, the plan was the best way for South Orange to preserve a historically significant building and to ensure that the land is never overdeveloped.

This is a “move in the right direction,” said Collum.