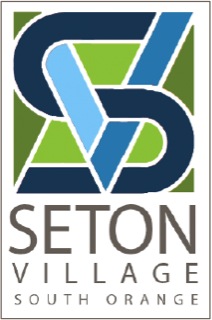 South Orange is capping a year of progress on Irvington Avenue by rebranding the commercial district as “Seton Village.”

The new brand was unveiled tonight at the South Orange Board of Trustees meeting by Irvington Avenue Corridor Advisory Committee Chair Doug Zacker.

Zacker said that Seton Village banners were being installed this week — just in time for the inaugural “Light up Irvington Avenue” holiday tree lighting celebration this Friday, December 12.

“Knowing that places have a greater potential to thrive when they can be easily identified and embraced using a unique name, the committee tapped into lots of community input, including a web-based vote on a final selection of three names, to come up with Seton Village,” said Zacker in a release.

The Seton Village logo will be seen on the banners which will hang on gas lamps on Irvington Avenue between Prospect Street and Seton Place. The logo and rebranding were paid for through a $3,500 branding contract to ITO Inc. — the same group working with the South Orange Village Center Alliance — at the recommendation of the IACAC’s marketing & branding committee.

“We are all part of the same wonderful South Orange community so we wanted a logo that is unique but related to SOVCA. ITO did a great job of helping us get to that vision,” said Michael Baldwin, chair of the marketing subcommittee.

By the way, “Seton Village” won out over two other finalists in a non-binding online vote. The other finalists were “South Orange Uptown” and “Irvana” (that latter got some chuckles from the audience at the Board of Trustees meeting). Seton Village won in all demographic categories — students, residents and shoppers — reported Zacker.

“The work you guys are doing embodies how amazing the work of a group of volunteers can be,” said Village President Alex Torpey.

In January, the village helped form the Irvington Avenue Corridor Advisory Committee, or IACAC. Since the committee was appointed, it has formed four working groups in beautification, events, marketing & branding, and a business alliance group which is looking to form a merchants association for the avenue. Successes thus far have included several “Clean up, Green up” events and a Food Truck & Craft Beer Festival in October. (Read more about progress on Irvington Avenue here.)

To find out more about the Light Up Irvington Avenue tree lighting event, visit here.