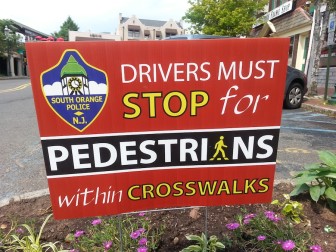 Since South Orange launched its “Cops in Crosswalks” campaign in May as part of a pedestrian safety initiative, police have issued more than 600 tickets to drivers who failed to stop for pedestrians and for other related traffic violations.

Town officials and residents seem to agree the campaign has been a success, said Trustee Sheena Collum, who chairs the public safety committee, and South Orange intends to continue the initiative.

“[Over the] long-term we will build a reputation as a community that enforces its laws,” said Collum in an email interview.

Collum said that last March, as she sat in Spiotta Park, she was alarmed by how many cars failed to stop for pedestrians in the crosswalk.

“There were instances when cars literally swerved around pedestrians and I witnessed vehicles try and pass the cars that had stopped in front of them for pedestrians,” said Collum. “It was and is unacceptable. Pedestrian fatalities account for about half of all motor vehicle deaths in Essex County, which ranks among the highest rate in New Jersey. Even in South Orange, we had a pedestrian struck [a few weeks ago].” 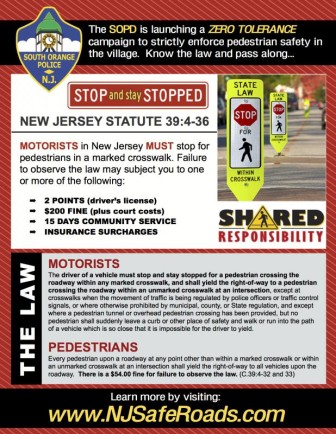 Collum said that South Orange is heavily investing in economic development throughout its business corridors, and “with that comes a big responsibility to ensure our roadways are safe for all users – motorists, walkers, bikers, children, seniors, etc.,” Collum said. “By taking a holistic approach, we’re confident we’re on our way to achieving our goals.”

The program was initially funded by a grant from the Division of Highway Traffic Safety, and continuing costs will be largely offset by revenues from fines, said Collum. The village receives roughly $68 out of each $200 fine; the rest goes to the state and the Pedestrian Safety Enforcement and Education Fund.

Each time the police department conducts a crosswalk detail, they issue between 20-30 ‘failure to stop’ summonses. “This shows us that there is still a problem that warrants ongoing and enforcement efforts,” she said.

At the July 14 Board of Trustees meeting, Trustee Deborah Davis Ford asked how the town was measuring the effectiveness of the program. Collum said that while the town had no prior measurements to compare to, feedback from residents and police was positive. “It seems like people are slowing down,” she said.

In response to a question of whether the program was successful with non-residents, Trustee Walter Clarke said, “I think out of town people will learn. It becomes a culture.”

Trustee Howard Levison said he thought the program was a good way to diminish speeding without spending money on bricks and mortar fixes like modifying or narrowing roads and intersections. “I get a lot of complaints about speeding,” Levison said.

As chair of the public works committee, Clarke is working with the Village Engineer and Public Works Director on a crosswalk audit, to ensure crosswalk lines are clearly marked and visible to motorists.

South Orange has initiated other safety measures. For instance, at the recommendation of the Transportation Advisory Committee and with support from police, the town installed line delineators to improve pedestrian visibility at the intersection of N. Ridgewood and Beech Spring Roads by South Orange Middle School.

“So far, we’ve heard it has helped,” said Collum.