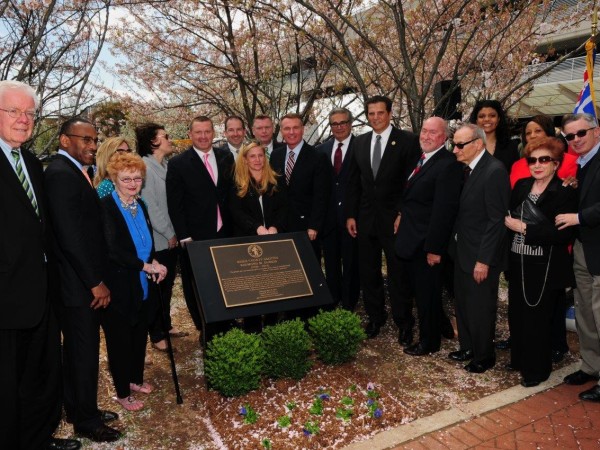 When Durkin passed away last December, NJ.com called him “a pillar of state and Essex County Democratic politics for decades.”

The plaque was placed on the promenade in the Essex County Government Complex to raise awareness about Mr. Durkin’s contributions to Essex County. He was a resident of Maplewood when he passed away on December 23, 2014, at the age of 78.

“We affectionately described Ray as being a member of the Old Guard because he was a seasoned veteran of Democratic politics. Ray was a superior strategist, leader and mentor to generations of many young Democrats who he tutored, including me. Known for having a great sense of humor, but he possessed a keen understanding of government and politics, had tremendous ability to build bridges and find consensus, and reacted to all situations with calm reasoning,” DiVincenzo said. “This plaque is an opportunity to share Ray’s legacy with future generations and is a fitting tribute to someone who positively impacted the lives of so many,” he added.

“My father had the ability to make everyone feel special. He had the ability to make you feel safe and make you laugh. I’m inspired by all the people who have come today,” said his son, Essex County Clerk Christopher Durkin. “He was tough and shrewd, but people gravitated to him because he was friendly and affectionate. My father loved politics, history and sports, but he especially loved the feeling he got by helping other people. Most of all, he loved my mother, Joan,” he added.

Those who spoke during the program shared stories about their friendship with Mr. Durkin and the positive impact he had on their lives and others.

“Ray had incredible influence and helped so many people,” said John Clancy, Executive Director of Community Education Centers. “He helped many people get back onto their feet, get a job and find a better way of life. He loved his wife Joan and his family, and that love only grew deeper and deeper,” he added.

“I am so grateful that Ray saw something special in me and gave me a chance in public service. He was my counselor, mentor and advisor,” Essex County Democratic Committee Chairman Leroy Jones said. “Ray was a great believer in public service but family was the ultimate gift,” he noted.

“It’s amazing that an individual could have the stature and respect throughout the state,” Assemblyman Thomas Giblin said about Durkin serving as Essex County Democratic Committee Chairman and New Jersey State Democratic Party Chairman at the same time in the late 1980s and early 1990s. “He was a role model, and we all reached out to him for his guidance and advice,” he added.

“Today is an opportunity for us to show the love and respect we have for Ray. When Ray was your friend, he was your friend forever,” Newark’s North Ward Democratic Committee Chairwoman Fran Adubato said. “He had such a strong spirit that his memory will live on forever,” she added.

“Thank you, Joe DiVincenzo, for memorializing our friend in such a fitting way,” former Freeholder Joseph Parlavecchio said. “Ray had a tremendous legacy that could be described in three parts: his sense of humor, his political acumen and his love for his family. His family was most important to him and it was his strength,” he noted.

“Ray brought you into his life. I’m forever glad that I was his secretary. I will always love him. The Durkin family has inherited me,” said Evelyn Williams, who was Mr. Durkin’s secretary when he served as party chairman.

“We all know what kind of man Ray was. He could get along with anyone and, for many of us, he was our friend and mentor,” former Governor and NJ State Senator Richard Codey said.

The bronze plaque begins with a quote from author and publisher Bennett Cerf: “The person who can bring the spirit of laughter into a room is indeed blessed.” It continues: “Many qualities of Ray Durkin come to mind – political acumen, a quiet, forceful leader, visionary, strategist and role model. All are accurate. As a Municipal, County and State Democratic Party Chair, he exhibited all those traits and more, helping to turn New Jersey into a ‘blue’ state. With his quick wit, clever turn of a phrase and an Irish twinkle in his eye, Ray was able to defuse any situation, and bring everyone to the table. Beloved father of five, devoted husband to Joan, he was a mainstay of the strong Irish political wing – yet one who partnered with all ethnic groups. A member of the ‘Old Guard,’ mentor to many of today’s Democratic leaders, Ray Durkin leaves a legacy of achievement, dedication to others, and a belief in the principles of fairness and equality. He also leaves footprints that will be hard to fill.”

Durkin was the Essex County Democratic Committee Chairman from 1980 to 1992, the State Democratic Chairman from 1985 to 1990 and the Democratic Committee Chairman in Maplewood. He was instrumental in getting the late Donald M. Payne elected as New Jersey’s first African American Congressman and with transforming New Jersey into a Democratic, or blue, state. Although he retired from politics in 1996, he remained active in the Democratic Party both in Essex County and New Jersey, serving as a mentor to generations of up and coming politicians. He was known for his sense of humor and his political wisdom, which he used to build bipartisan relationships.

Outside of politics, he was President of Durkin and Codey Realtors and formed the Ray Durkin Association, through which he served as a consultant for New Jersey development companies.

Born in Newark, he was raised in the Vailsburg section of Newark before moving to Maplewood. Durkin was graduated from Seton Hall Prep, served in the military and became a firefighter in Newark. He later graduated from Seton Hall University on the GI Bill and became the Essex County Purchasing Agent in 1978, which was the start of his political career.

He was devoted to his family and friends, and took great pride in helping those in need. He is survived by his wife of 48 years, Joan Codey Durkin; children, Raymond Jr., Christopher and his wife Danielle, Timothy and his wife Joanne, David and his wife Allyson, and Maureen and her husband Matthew Holleran; a brother, Frank; and nine grandchildren.