When Maplewood Girl Scout Troop 20248 presented an awareness campaign for the Essex-Hudson Greenway Project, which would create a nearly 9-mile walking path connecting Montclair to Jersey City, at the Township Committee’s May 18 meeting, the fifth graders were surprised by the result: a resolution of support to be shared with the Governor and County officials.

“I’m really proud and excited [about the resolution] because I thought it would just be sharing at a town council meeting and they’d be like, ‘Oh great idea. Next,’” said girl scout Lucie W., a few days later.

At the public meeting, the troop presented a slideshow to the Township Committee members that introduced the proposed Essex-Hudson Greenway Project, which, according to the Greenway Project’s website, would create more than 135 acres of new green space along unused rail tracks. 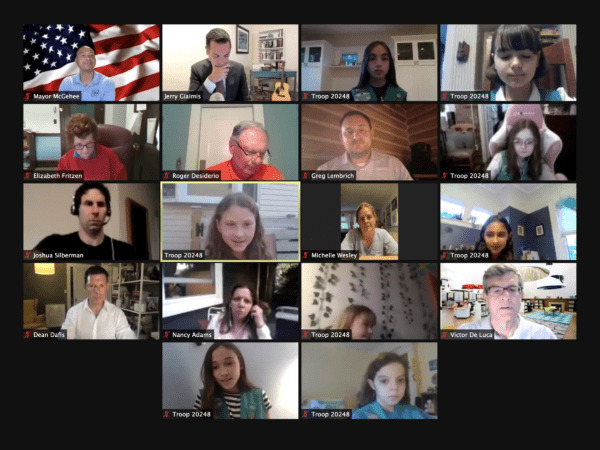 The girls started advocating for this project, developed by the Open Space Institute, as part of their work toward a Bronze Award, the highest Girl Scout award at their level. Their troop leaders Lynne Daley and Cristy Mendoza later explained that to earn the award, each girl must commit to dedicating 20 hours toward a girl-led project. The troop chose to focus on the Essex-Hudson Greenway Project after researching a variety of ideas.

“I like that it was helping the environment and it’s something that interested me because… I would like to go on and be there,” said girl scout Ilora P.

While brainstorming ideas to build awareness of the green space project among the Maplewood community, girl scout Lorelei H. mentioned she had once spoken at a Township Committee meeting, and the troop thought that was a good idea.

At the meeting, they explained that now is the time for the community to voice their support by visiting the Essex-Hudson Greenway Project website and signing up for project updates and to volunteer. Maplewood residents will soon see flyers and other materials from the troop as they implement the education campaign they created.

“My goal is to get other people to know about it, because a lot of time people see girl scouts as tiny little girls that are hiking… but I think that this can really really help the environment right now because we have a lot less green space,” said girl scout Marianna D.

The Troop explained the importance of the community showing support of the project throughout the month of June. A preliminary agreement was negotiated between the Open Space Institute and the Norfolk Southern Railway Company, current owners of the land, in July 2020, according to a press release on the New Jersey Bike & Walk Coalition’s website. But the financing is still pending.

“We need to really get it moving because the owner of the greenway space, they are going to sell it off to individual people at the end of June, because it’s the end of the fiscal year. And then there will be a bunch of shops and stuff instead of a nice hiking trail,” said Girl Scout Ruby C.

Troop Leader Daley clarified the complicated topic and said, “They have agreed to sell the whole piece if the counties and state agree to purchase it and develop it as one whole piece, but it’s a limited time offer. If it’s not a part of somebody’s financial plan ….if there’s no forward movement by the end of the fiscal year, then they’re going to start talking about parceling it off.”

See a letter to the editor from one of the Girl Scouts here.